Last weekend saw Merrion relinquish its hold on the Premier title and starts today in third place in the league table.  A much stronger position than seemed likely two weeks ago. The threat of relegation has not been entirely removed but another season at the highest level of Leinster cricket is very much within our grasp.

Although the title has been secured by Balbriggan, the contest to avoid the drop to the Championship is the tightest it has ever been. There have been complaints voiced about the structure of a competition that relegates a quarter of the team taking part each season.  But it does lead to exciting finishes without any dead rubbers.

So what is needed today. A win for the 1st XI would of course ensure safety and might even achieve the runners up position. In the event of a loss, the minimum number of points needed is two. Anything less than that and it depends on the results in the other matches. 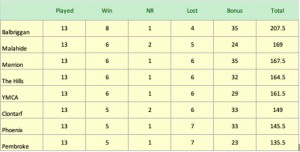 In the final round the matchups are:

The permutations, if Merrion lose and gain zero points, are as follows.

YMCA need a win against Balbriggan

Clontarf need a win against The Hills and The Hills need at least four points from a loss.

If Merrion achieve just one point from their game then Phoenix will need a 24 point win and The Hills must get at least five points.