Overall, it was a good week for the club. The 4ths and 5ths registered huge wins. Also, the 3rds and 2nds did one better, winning both their respective games. Speaking of individual records, there were 2 centurions and also a 5-wicket haul. 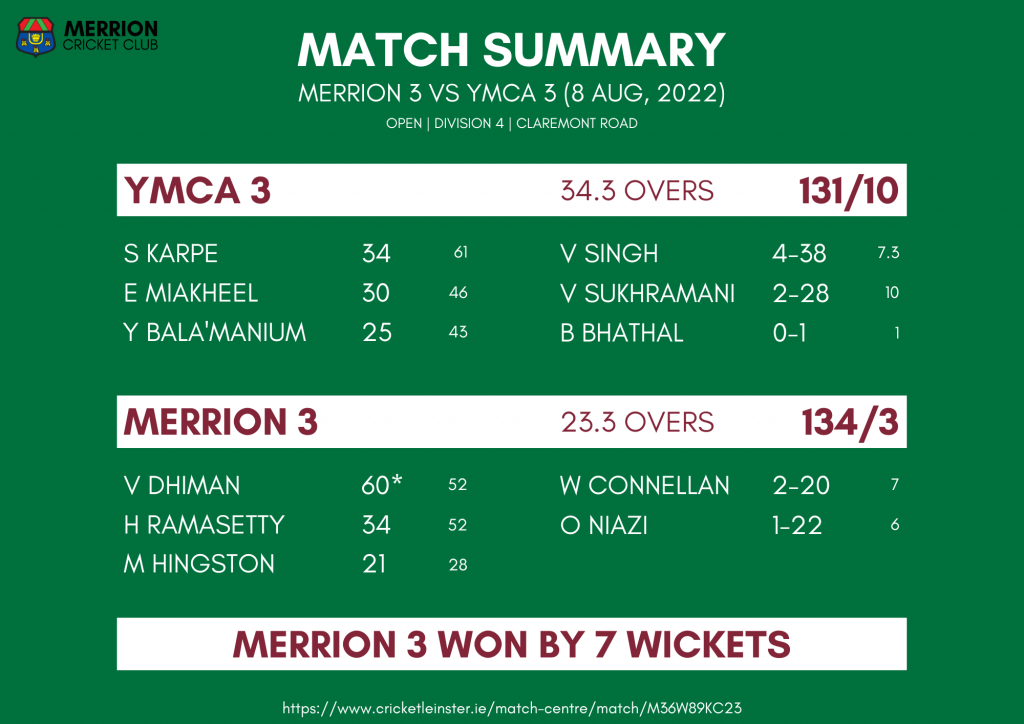 Going into the Tillain Cup T20 semi-finals, Merrion dominated the proceedings, comfortably beating Rush to progress into the finals against Pembroke 2. After a strong start (63/0 after 8 overs), Rush crumbled to 121/9 – the spin trio of Niranjan Shankar (3/16), Peter Forkin (3/16), and Daniel Forkin (3/26) doing the damage. It was never going to be enough against a strong batting line-up. The chase was done and dusted inside 15 overs, thanks to Niranjan’s 45 off 24 balls. Sainath Reddy (20*) finished the game with a flurry of boundaries. 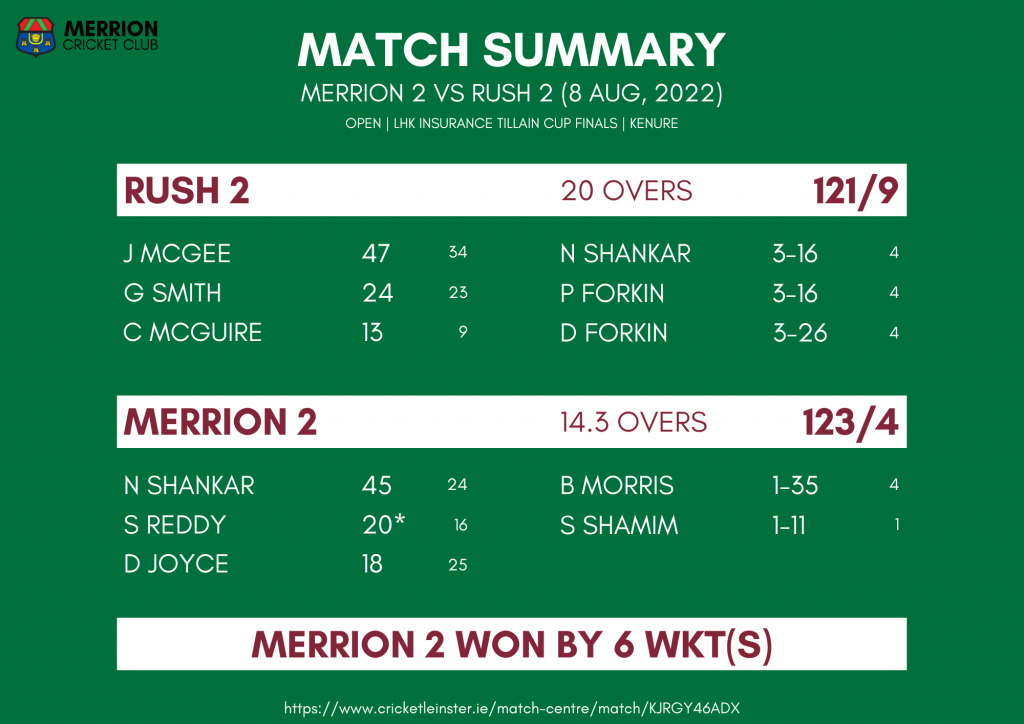 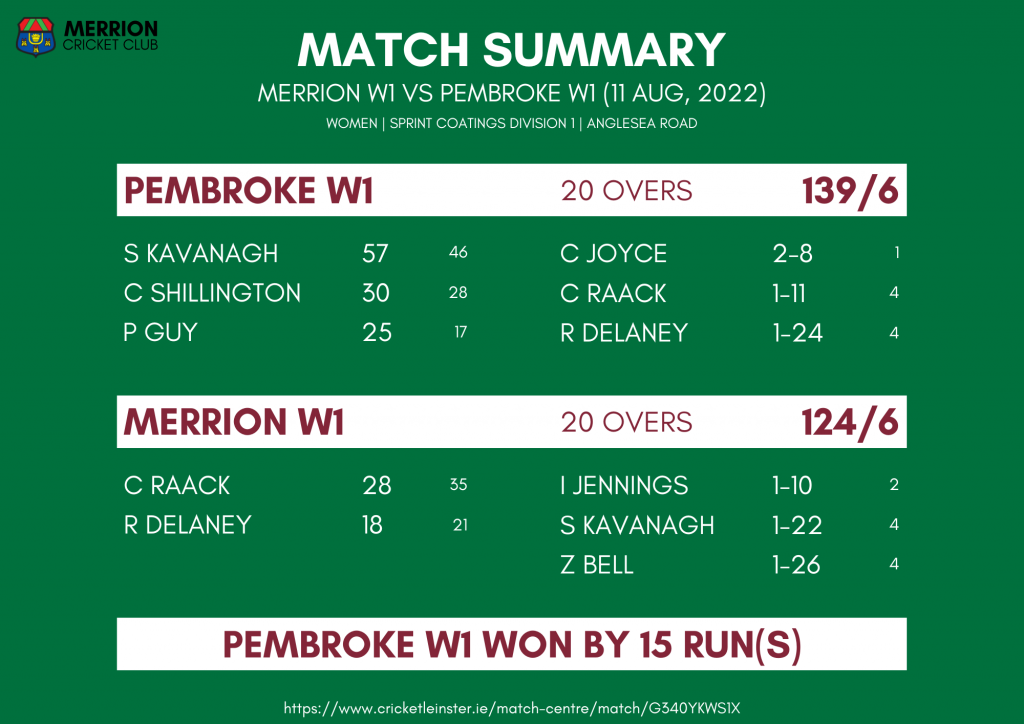 The 1sts could not chase down a modest target of 221, losing to Hills by 55 runs in their league encounter. Batting first, Hills rode on the back of M Donegan’s brilliant 88. Jack Carty [2/39] and Mohammed Sinan [2/32] picked two wickets apiece. Merrion’s chase never took off, Jack Carty once again leading the way with 33(39) but it was not enough. 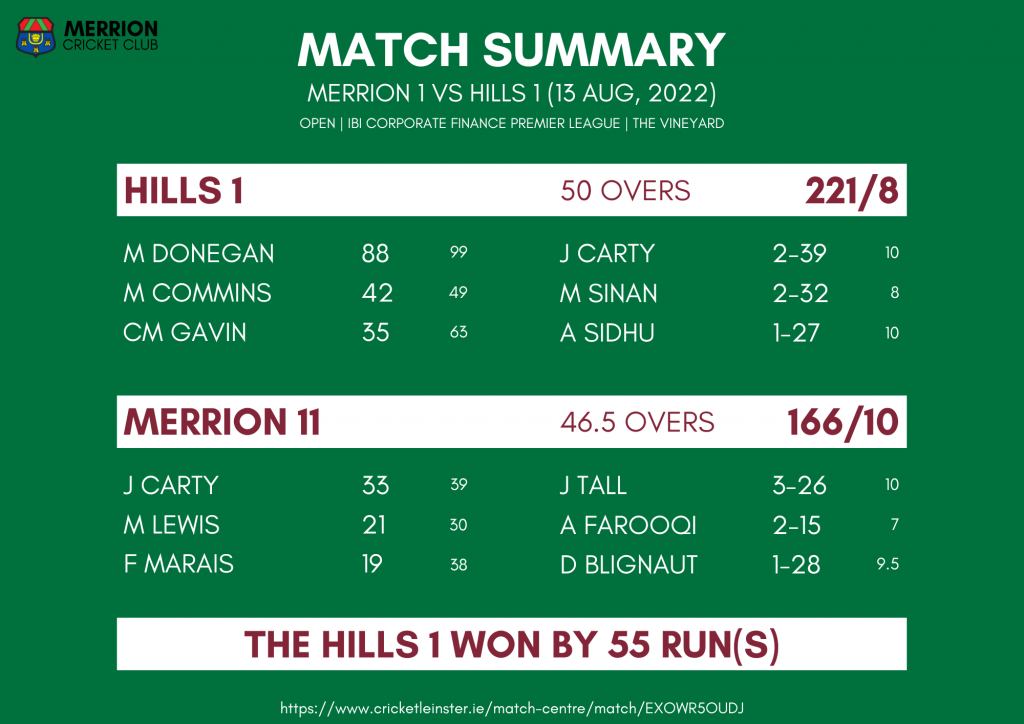 It was a dream day for the 5ths as they beat Longford by a huge margin of 80 runs. Killian O’Flynn [101*] led the charge with a brilliant century, and he was well supported by the evergreen Rob Stanton [74]. Kunal Kalra [3/14], Rishabh Sharma [2/16], and Killian [2/28] shared wickets between them, bundling Longford for a paltry 142. 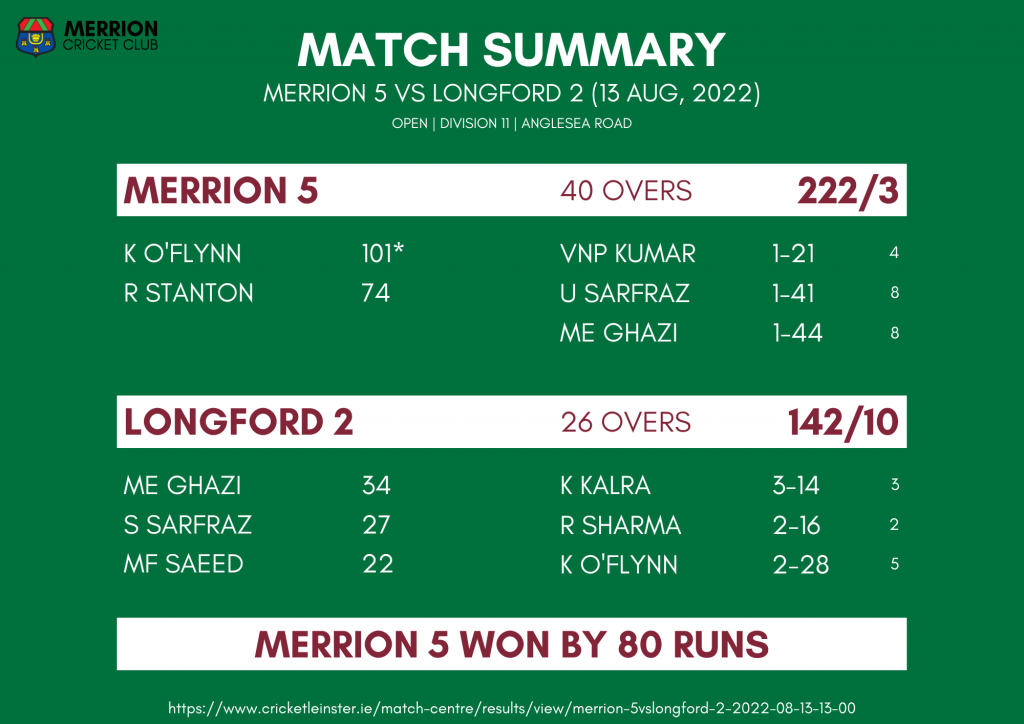 The last game on Saturday saw the 3rds take on Clontarf 3 in Castle Avenue. Batting first, Merrion could only make 198, thanks majorly to Beant Bhathal [37], Vikas Dhiman [36], and Conor Austin [32]. However, it proved to be plenty for Clontarf, who were bowled out for just 119 – Shreyansh Khanna [4/34] and Vishal Singh [3/29] doing the damage with the new ball. 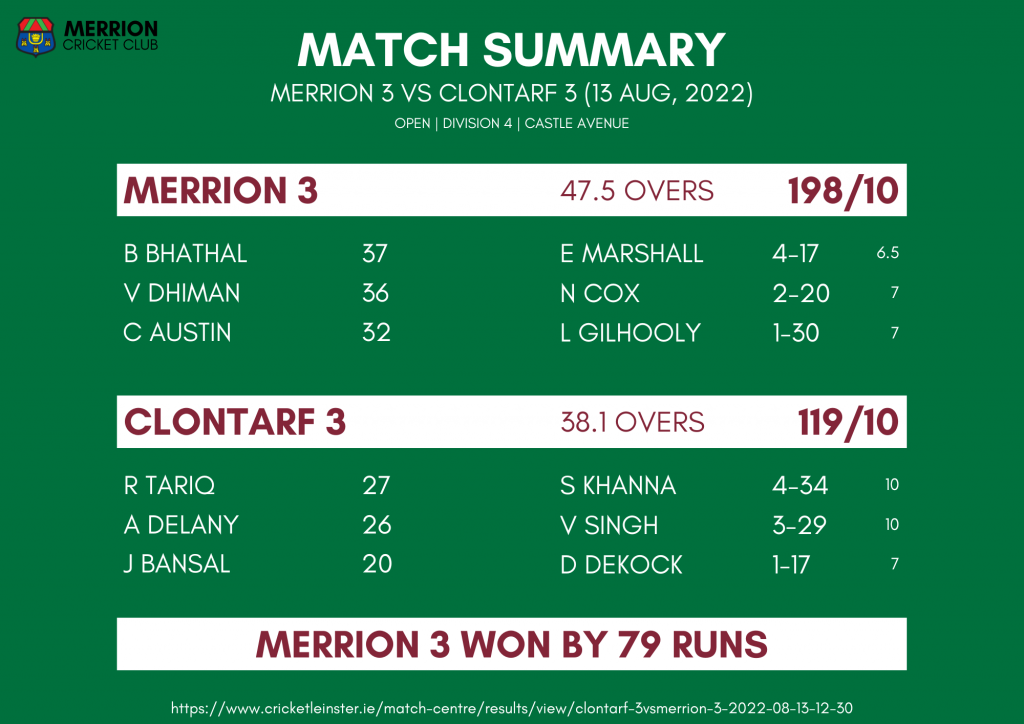 The 4ths came out victors after a smashing win against Greystones 1. The Dijkstra brothers (Seb Dijkstra [66] & Isaac Dijkstra [39]) stabilized the innings after a rough start and later, it was left to a fantastic partnership between Seb and Sid Kalra [66] to take Merrion to a commanding 253/5 in their 45 overs. The pair added 100 runs in just about 11 overs. The chase was nipped in the bud, thanks to excellent spells from Sean Sandys [5/23] and Chetan Suttraway [2/25] – reducing Greystones to 7/32 in the first 9 overs. 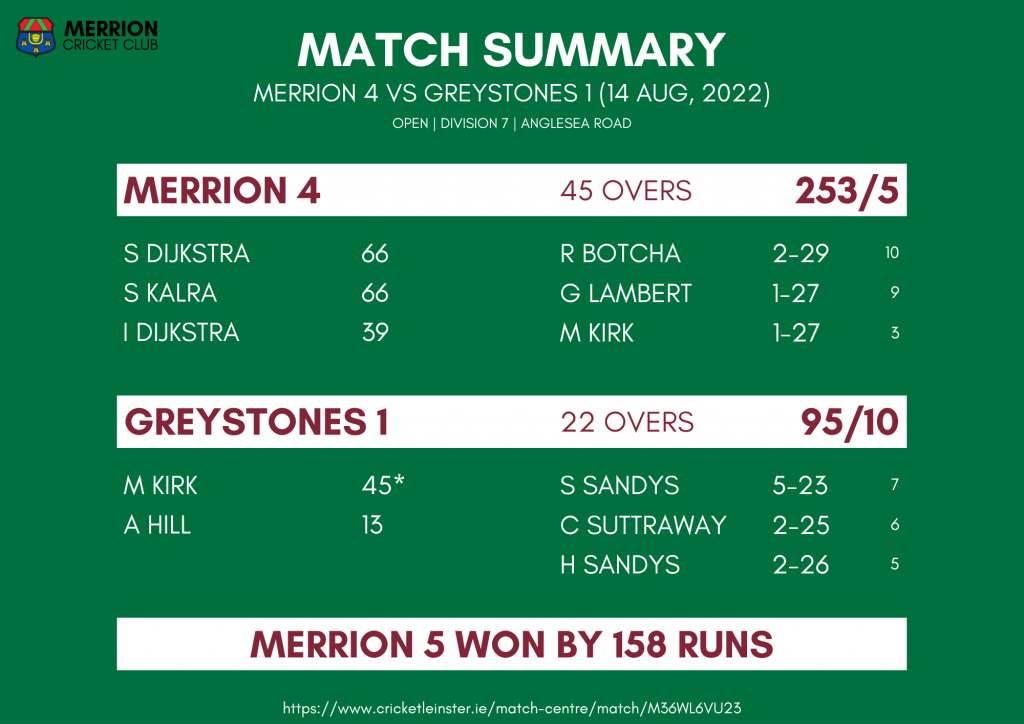 The 2nds brought the Tillain Cup home after beating Pembroke 2 in a closely fought game. It was a tricky YMCA wicket where big shots weren’t easy to come by. Merrion finished with a respectable 150 in the 20 overs, thanks to Niranjan Shankar [56*(48)] and Grant Glutz[27(24)]. The bowlers and fielders then decided to put their best foot forward, restricting Pembroke to 132 and eventually lifting the Tillain Cup once again. 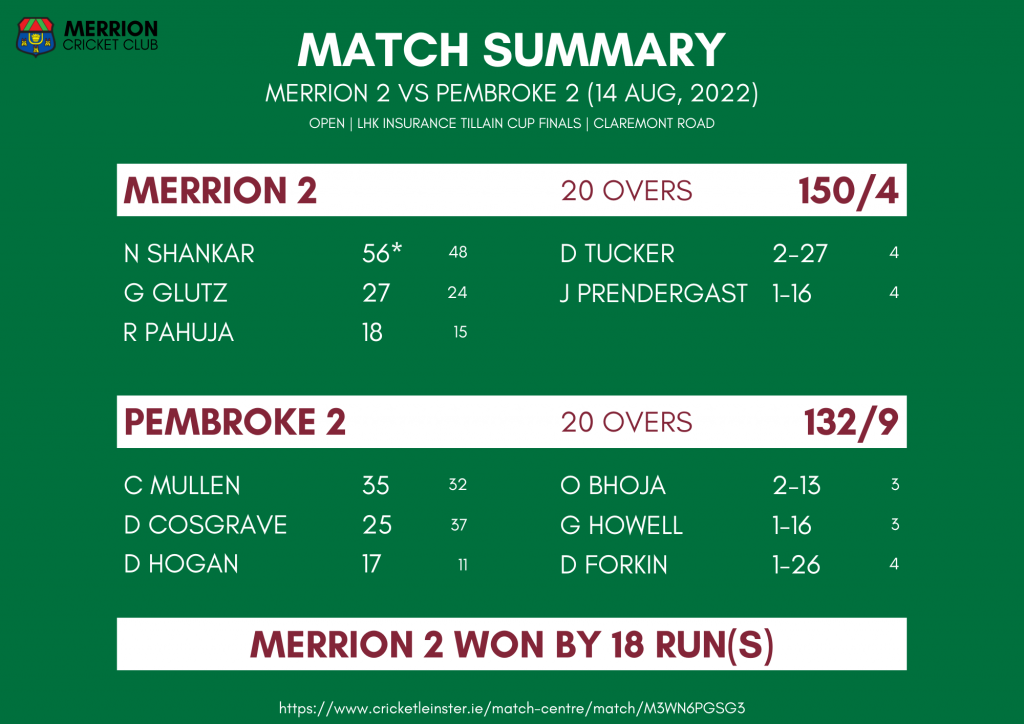 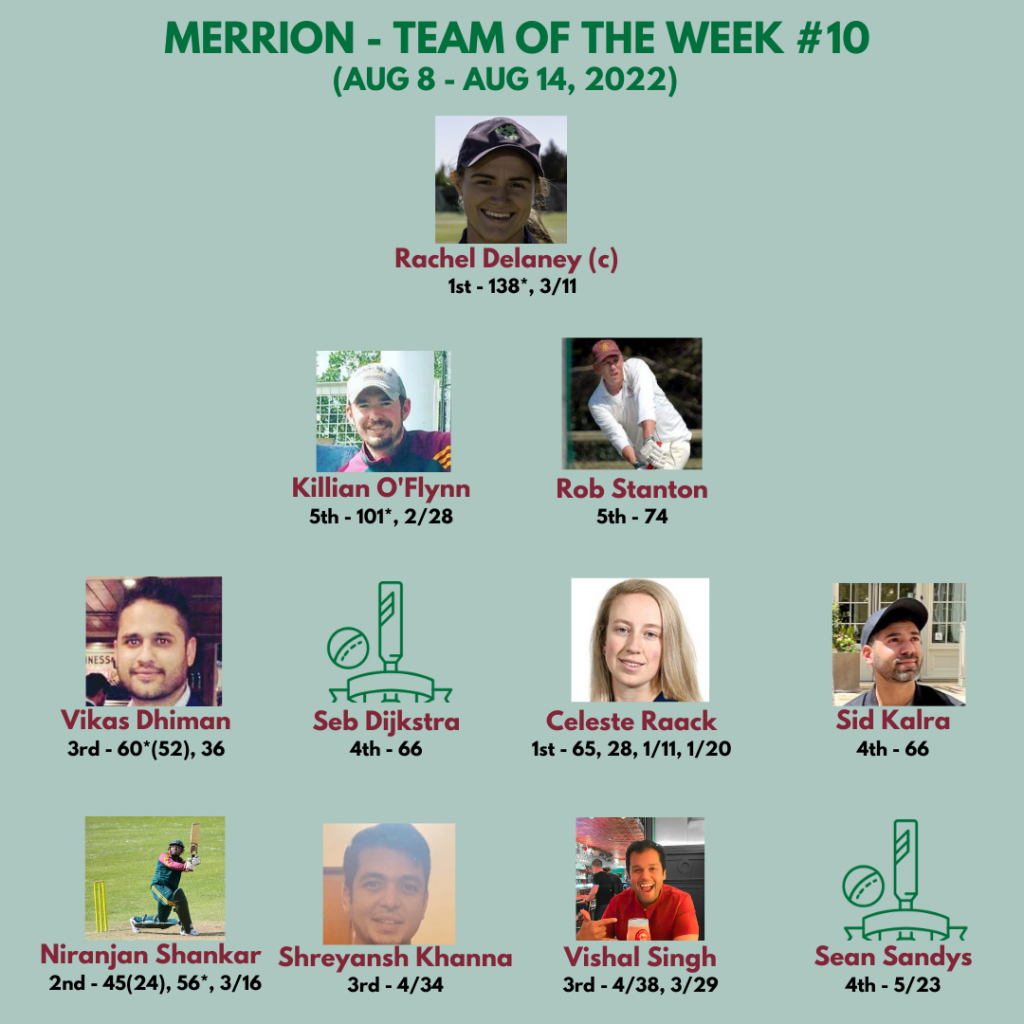