First trophy of the year

The victory over Clontarf on the 1st August at Sydney Parade was the seventh time Merrion has won the Womens Senior Cup since it started in 1977. Forty three years ago Merrion won the trophy for the first time, also against Clontarf.  But it was a much closer game back in 1979.

We don’t have the full list of players that day in 1979 [if anyone can complete the team please let me know] but the report in the papers saw a narrow Merrion victory on the second last ball of the match. Clontarf in  those days were the dominant team and between 1977 and 1991 won the competition every year except three [Merrion in 1979 and 1983 and Leinster in 1980]. 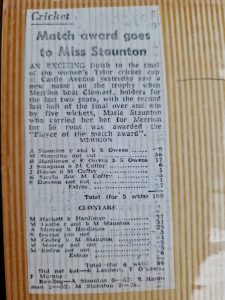 It was a very different story yesterday. From the start, having been put into bat, Merrion dominated. The power play saw Merrion score at around 10 runs per over. Even as Clontarf managed to pull the scoring rate back a little, the total mounted as openers Leah Paul [58] and Rebecca Stokell [78] piled on the runs in a 149 run partnership. In the end both fell in the 18th over and Merrion went on to make 160/2 in their 20 overs.

A lot was expected of the Clontarf overseas player Bhavi Devchand. She started well with a series of boundaries but in the 4th over she was tempted into another hit over the top by Julianne Morrissey [2/25] and was caught by Cecelia Joyce. Clontarf continued to battle but the heart had gone out of their innings and only one other player made it into double figures. The Merrion fielding was of a high standard with eight catches taken in all. Stokell was excellent behind the stumps and secured her Player of the Match performance with three catches and a stumping.

The wickets were shared across all the Merrion bowlers with skipper Celeste Raack leading the way with 4/11. There was one wicket a piece for Niamh McNulty [1/24].  Leah Paul [1/20] and Sabha Bhjoja [1/1].

The full scorecard can be found on https://www.cricketleinster.ie/match-centre/match/DJ27K5WF43 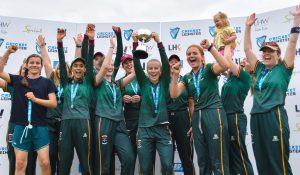