The result was very much in the balance at the halfway mark. Merrion had batted first in the Premier League encounter with Pembroke on Saturday in Anglesea Road. A score of 243 all out was certainly defendable but looked a little undercooked on another excellent hybrid wicket. The first innings had promised more with a near 100 opening stand from Jack Carty [62] and Stephen Doheny [38] at a run-a-ball. But not for the first time this year, what followed was a top-order collapse and it was left to John Anderson [49] and Michael Lewis [28] to bring some momentum to the innings with a 50-run 6th wicket partnership. With nothing much from the tail, the innings petered out short of the 250 mark which might have been counted as par.

The Merrion opening attack made early inroads and together with a helpful run out Muhammed Sinan [1/19] and Hugh Kennedy [1/44] ensured that Pembroke did not get off to the start they needed. A quickfire 50-run partnership from Theo Lawson and Danny Hogan threatened to wrest the initiative back to Pembroke but both were to fall to Amish Sidhu. The rather fortuitous run out of the Pembroke overseas player Poonish Mehta off the glancing hand of bowler Tom Stanton put Merrion back on top. For the remainder of the innings, the large crowd watching was treated to an excellent spell of accurate spin bowling, extracting just enough spin from the pitch to repeatedly beat or take the outside edge. Sidhu’s 7.1 overs provided a return of 6/15. This is his best bowling figure in a Senior match, beating his 6/33 for Phoenix against Rush in 2019.

One final point worthy of mention was the keeping of Doheny. A brilliant diving catch down the legside to dismiss David Cosgrave early in the innings was followed by two more catches and a stumping off Sidhu.

With Balbriggan winning and YMCA Merrion are now clear second in the Premier League table, 23 points behind the leader Balbriggan at the halfway mark. The unofficial table [awaiting updating by Cricket Leinster] now looks like this. 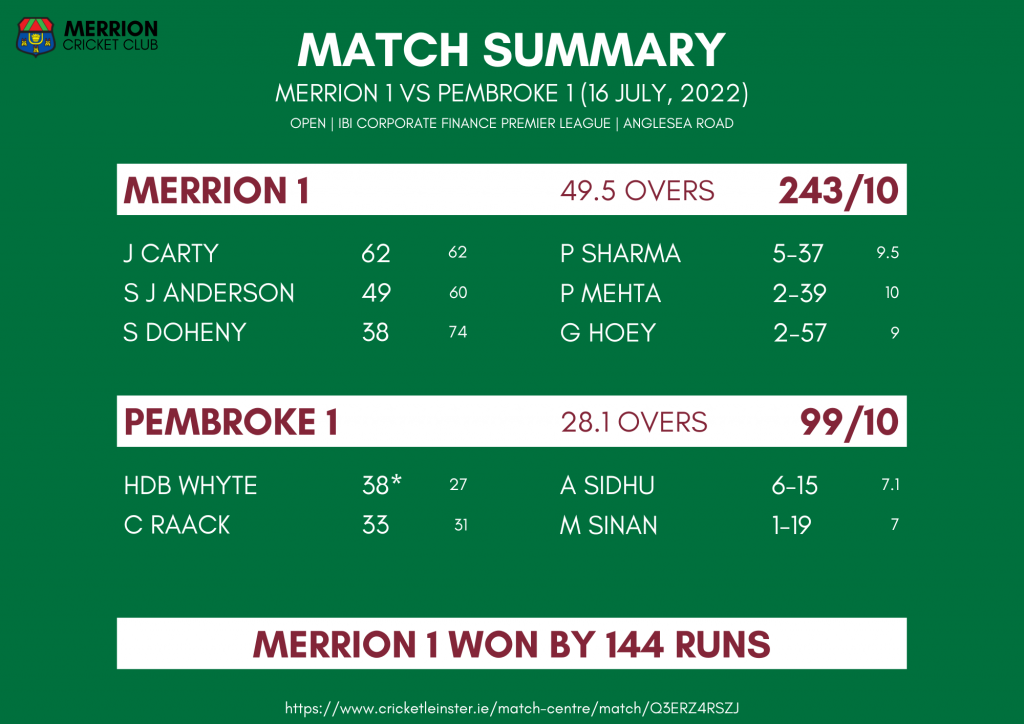 A double win for the Merrion women 1st XI over YMCA at Claremont Road during the week saw them through to the Leinster Senior Cup Final [1st August] and brought them neck and neck with YMCA at the top of the Senior League. In the first game, both sides fielded near full-strength sides. YMCA bated first and start with a battery of boundaries from Irish international Gaby Lewis. But when she was out, caught by Anabelle Squire off the bowling of Julianne Morrissey, the game shifted and Merrion gained the upper hand. More wickets fell but some tight bowling meant that YMCA could only manage 132/6 in their 20 overs.

Rebecca Stokell [17] and Leah Paul [48] opened the inning and put on a 50-run partnership. Although there was a brief scare when a couple of wickets fell in the 80s, Rachel Delaney [32*] successfully steered the team home to win by six wickets in the 16th over.

In the second game, played the following night in the absence of internationals on both sides, YMCA again batted first. Some good bowling and fielding ensured that YMCA was never able to post a large total and their innings eventually came to a close on 96/7. The pick of the bowlers was Cecelia Joyce with 3/20.

With Celeste Raack [33] and Hannah deBurgh Whyte [38*] making the bulk of the runs, Merrion was never really troubled and ended up winning by eight wickets.

With five games remaining in the league, a cup final and the two matches in the Pilkington [where Merrion are top of their section of the table] there is still everything to play for this season. 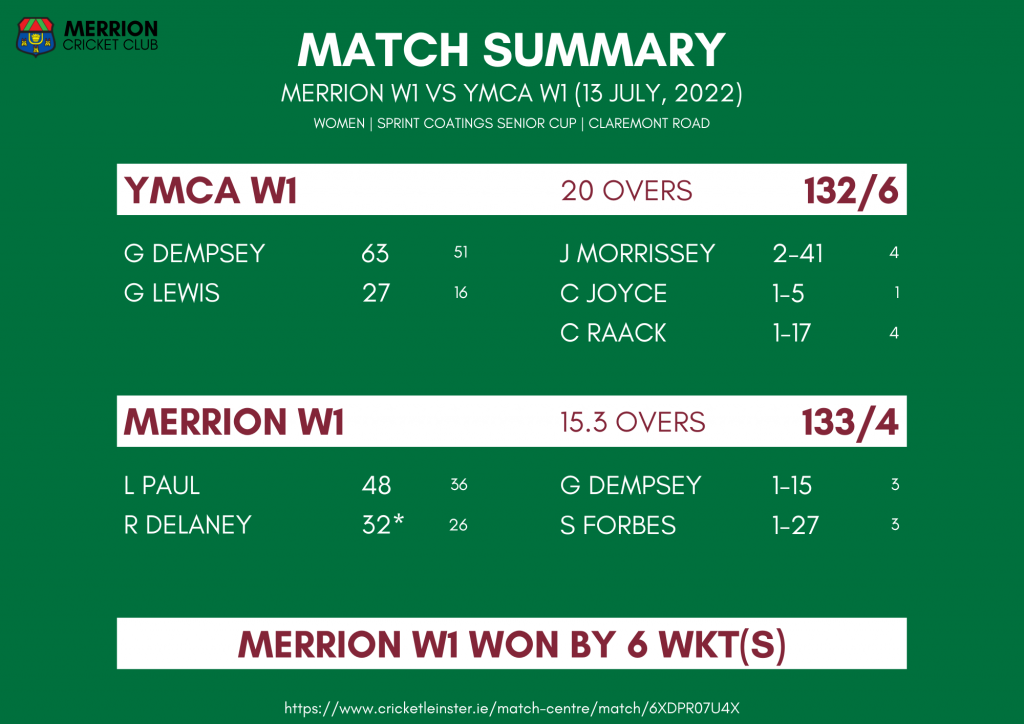 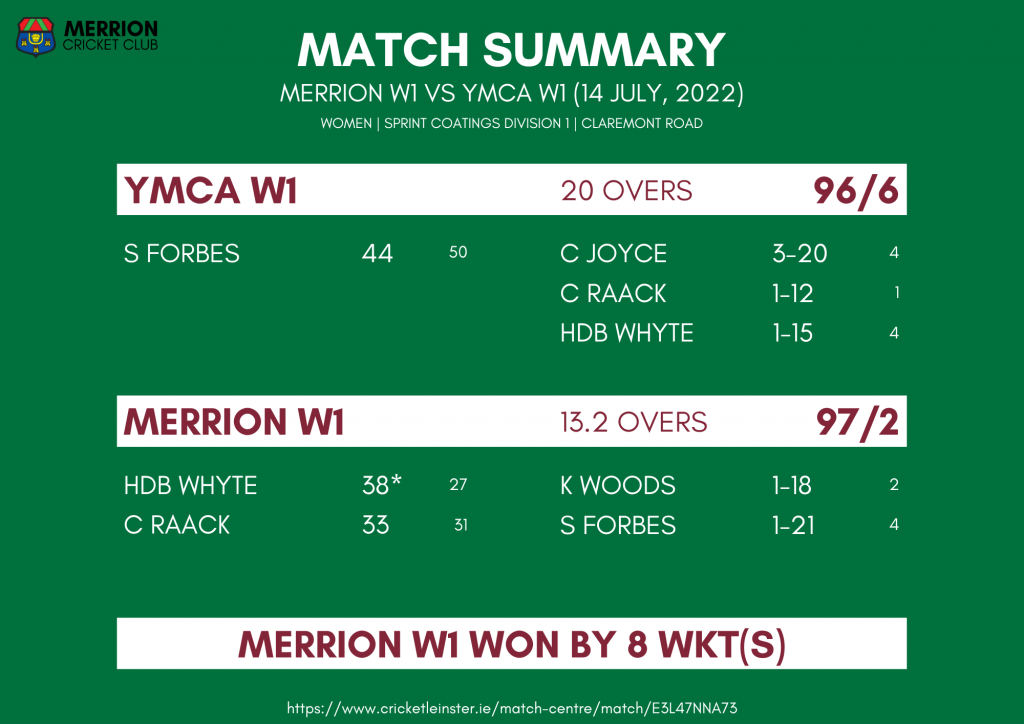 A hard-fought win by the 2nd XI against North County on Sunday ensures that Merrion maintains their pressure on Clontarf who are leading the Premier League for 2nd XIs. Batting first it was very much the Swapnil Modgill story. Opening the batting he made 129 out of a Merrion total of 230, his century coming in 75 balls. There was support from Peter Forkin [30] and Hermanus Bester [23] but otherwise, a disappointing batting card which saw the team bowled out in 37 overs.

The failure to bat their overs looked like being a costly error when North County reached 70 without loss. The introduction of Oisin Bhoja immediately produced results as he got both openers in a critical four-over spell [2/15]. A tense battle ensued with wickets falling but the runs needed steadily reduced. At 208/6 with four overs to go North County looked in the stronger position but the reintroduction of the opening pair of Jamie McNulty [2/37] and Garin Howell [3/46] saw Merrion home by 10 runs in an inspiring finish.

The bowling resources were well marshalled by skipper Chirag Poddar, who also took three dismissals behind the stumps. The batting was disappointing with eight players failing to get into double figures. A couple of runouts did not help but the team will have to work harder on batting their overs and building a score. 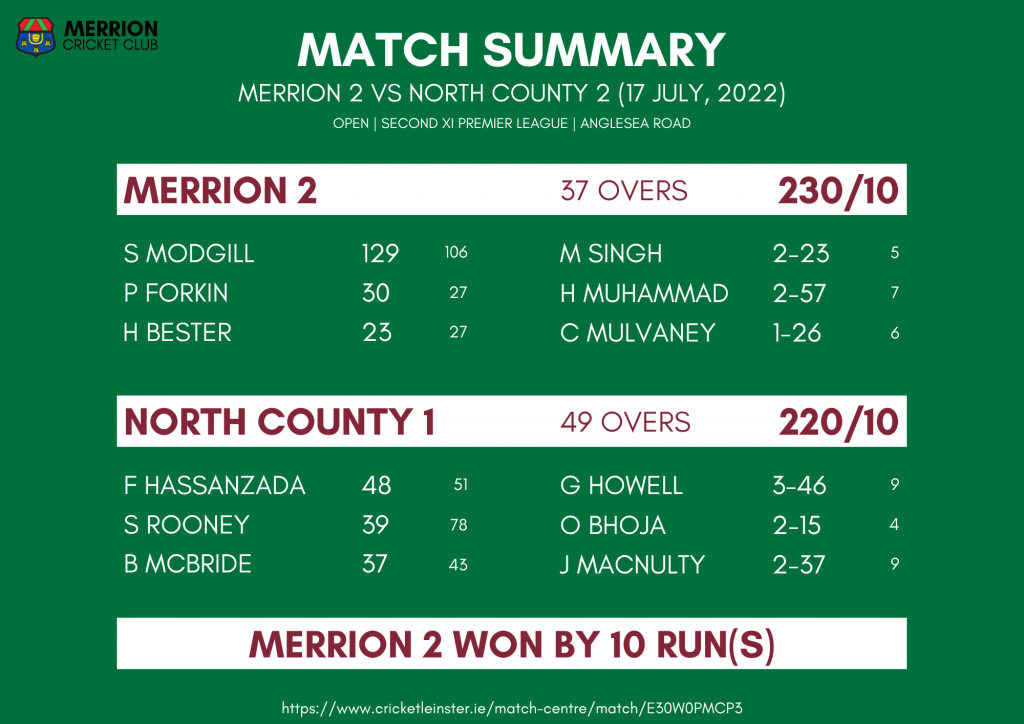 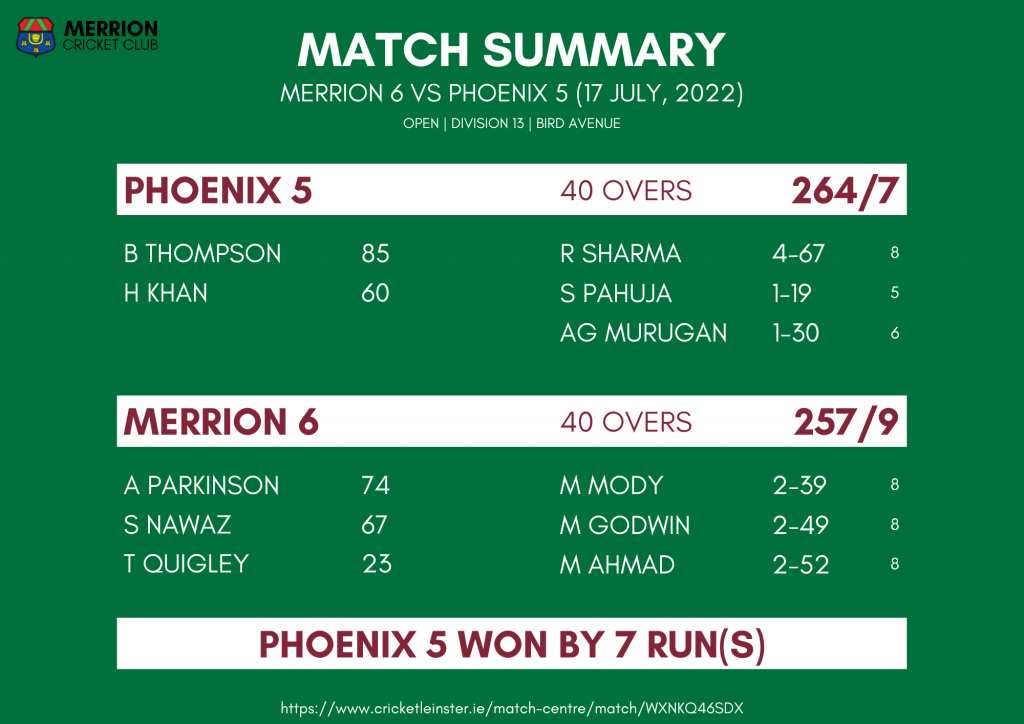 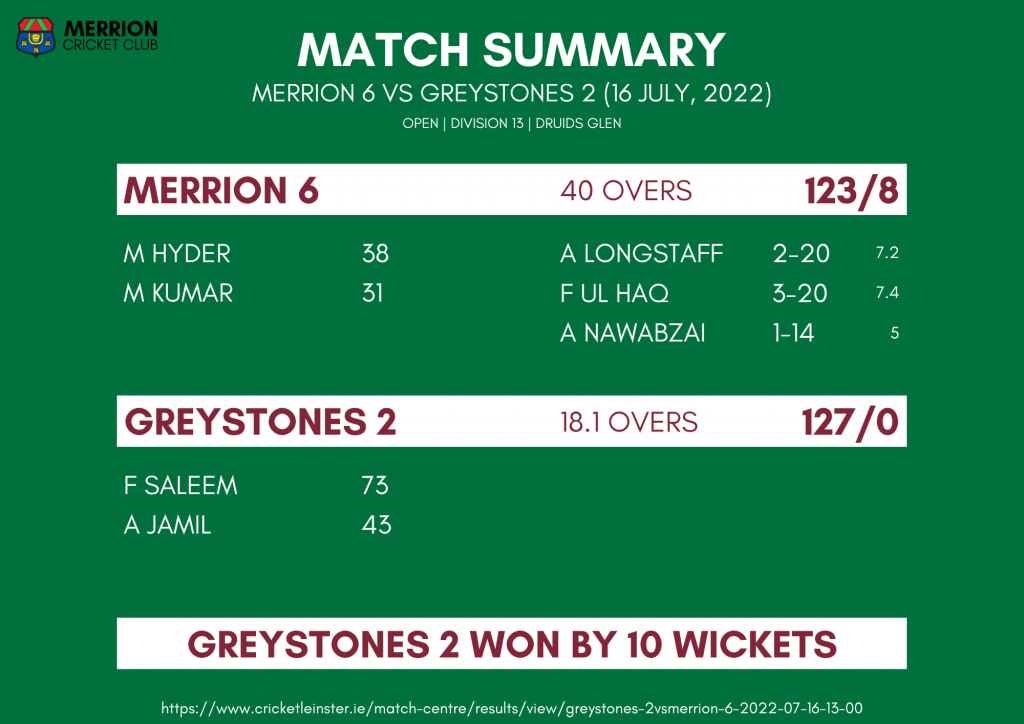 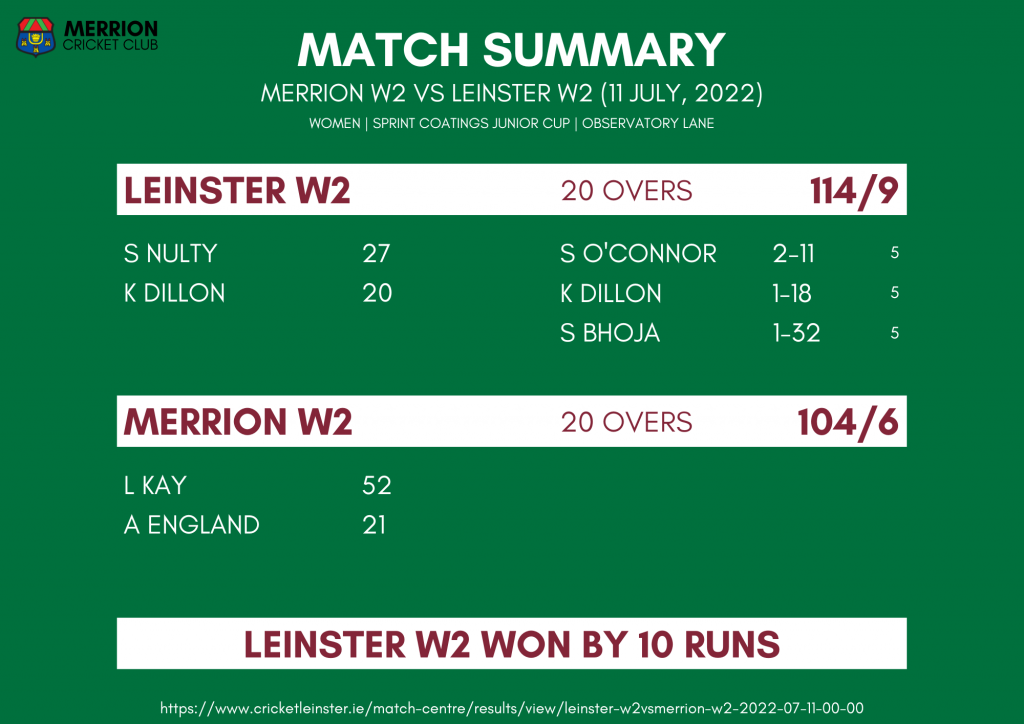 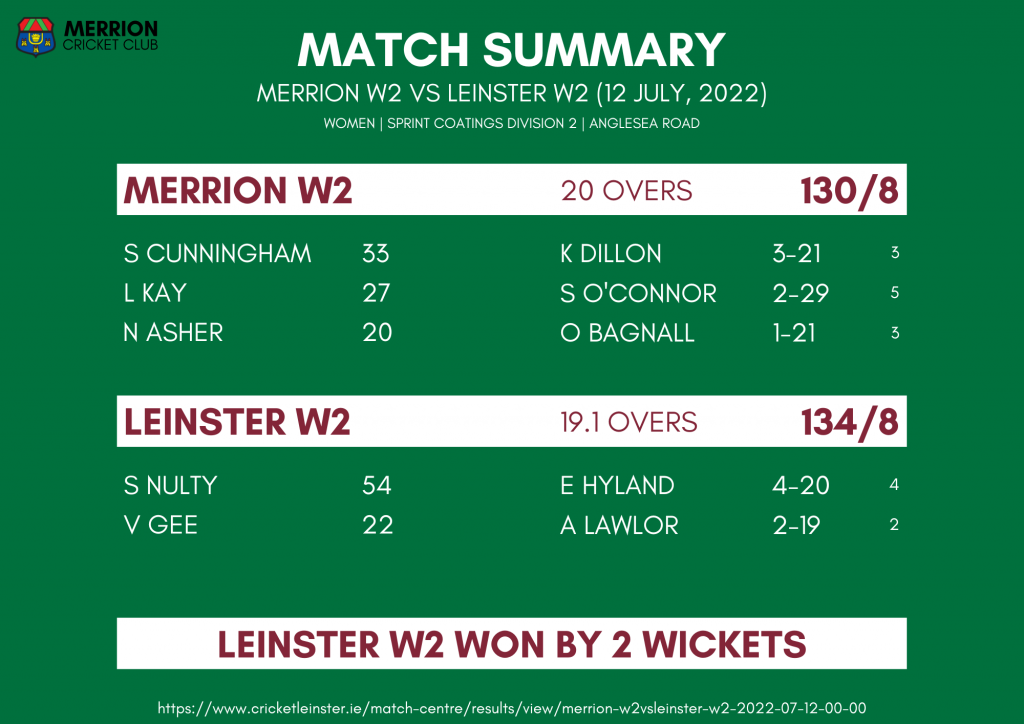 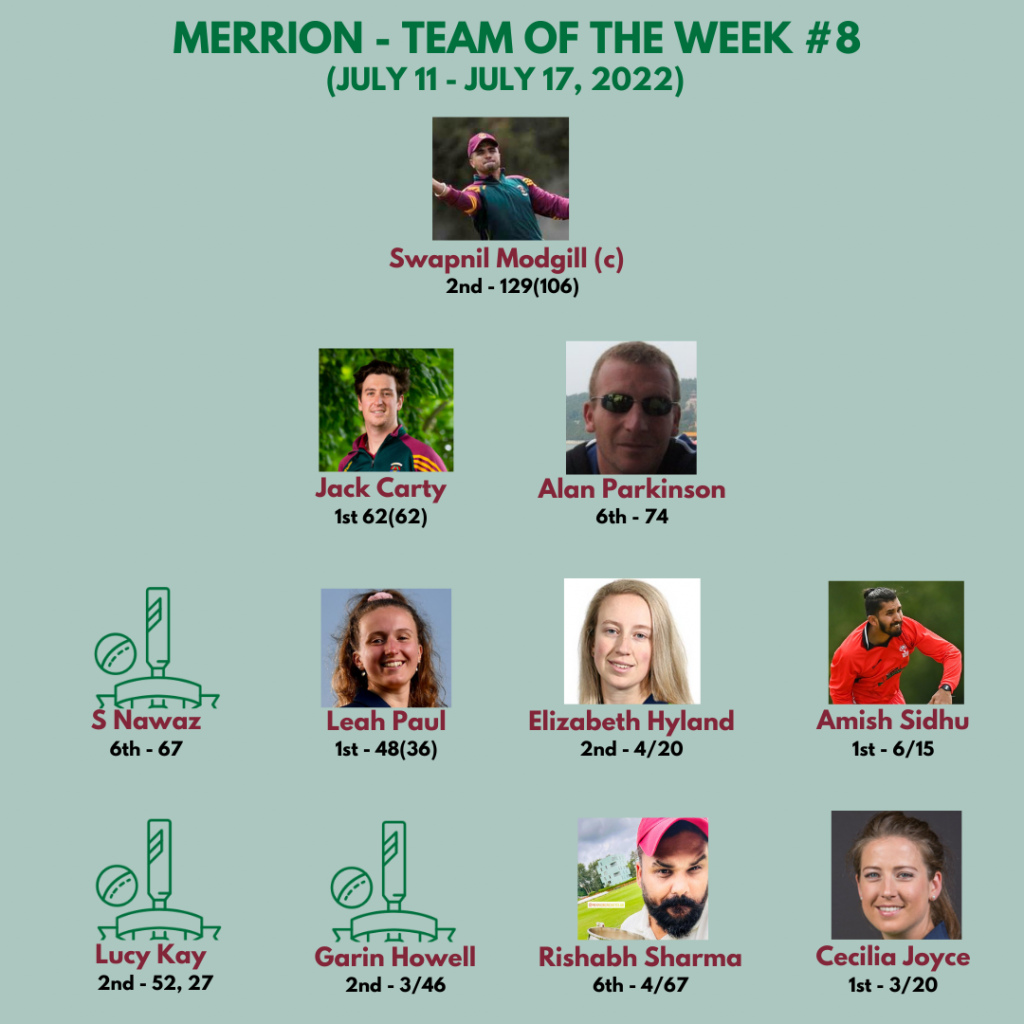