Merrion Women [1st XI] continued neck and neck with YMCA at the top of the Sprint Coatings Division 1 League after a fine win over Malahide [Thurs]. The highlight of the game was a fine century by Rebecca Stokell [126*] which propelled Merrion to a massive total of 223/2 in their 20 overs. There was good support from Celeste Raack [32] and Rachel Delany [43].

With Amy Hunter in the line-up, the game could not be counted won at the halfway mark, but when she was brilliantly caught by Delany off the bowling of Raack for 48 the writing was on the wall for Malahide. In the end, they batted well for their 139/5. The pick of the Merrion bowlers was Hannah deBurgh Whyte with 3/25.

In the end a comfortable win by 84 runs. 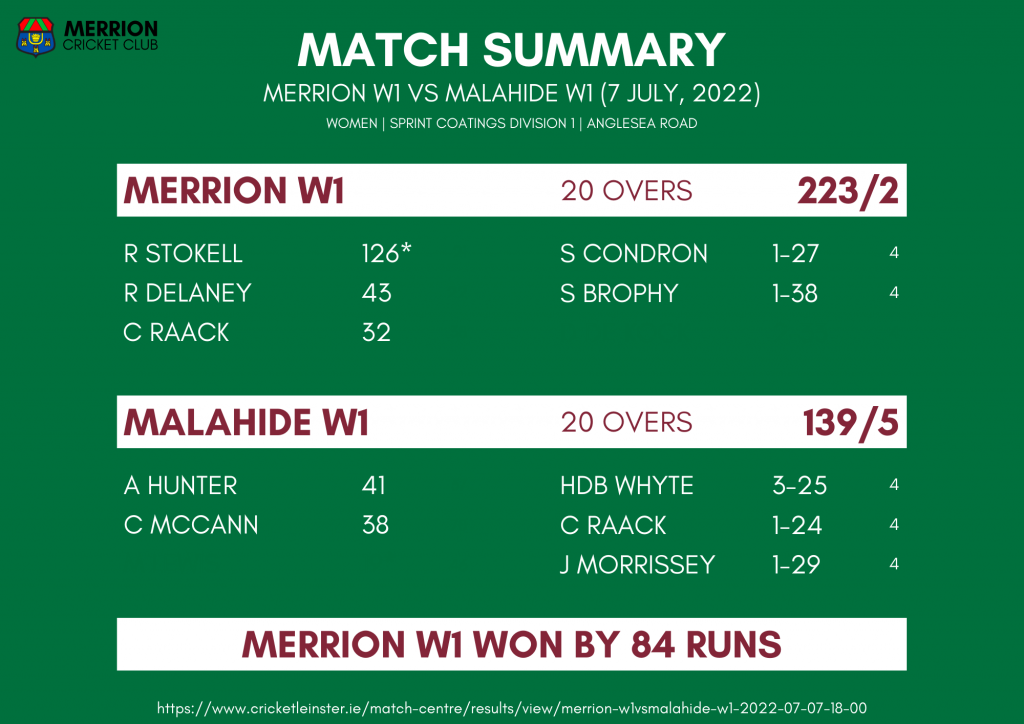 Going into the game with five wins out of five, Balbriggan were comfortably top of the Premier League when Merrion travelled north of the Liffey to take them on in the sixth round of this year’s competition. Merrion were still smarting after failing to defend a total of 292 against Balbriggan earlier in the season. So it was an important game for the club and the competition.

Winning the toss and inserting the home side proved to be a good decision from skipper Tom Stanton. The opening bowlers accounted for the Balbriggan openers before the score had reached 30, but thereafter it was down to the Merrion left-arm spin attack. A third-wicket partnership brought the score to 85 and was looking dangerous before Tom Stanton struck. This brought something of a batting collapse with Tom Stanton [4/21], Amish Sidhu [2/31] and Daniel Forkin [2/14] all in the wickets. In the end, Balbriggan were bowled out for 143 in the 46th over.

Merrion made a similar start to Balbriggan with both openers out by the time the score reached 31. A 30 runs partnership between Franco Marais [35] and Swapnil Modgill [12] ensured there was no early collapse and it was left to John Anderson [51*] to bring the game home for the loss of four wickets in the 39th over.

With other results producing losses for Pembroke and YMCA, there are a lot of teams bunched around the middle of the league table. With their extra win, Balbriggan are still on top. Merrion now joins YMCA on four wins, with Pembroke, The Hills and Phoenix all on three. Clontarf and Malahide did not play yesterday, so they remain at the bottom of the table. Malahide with one win and Clontarf is yet to secure a league win this season.

A report on the game can be found on the Cricket Leinster website at https://www.cricketleinster.ie/news/anderson-and-stanton-on-song-as-merrion-topple-balbriggan 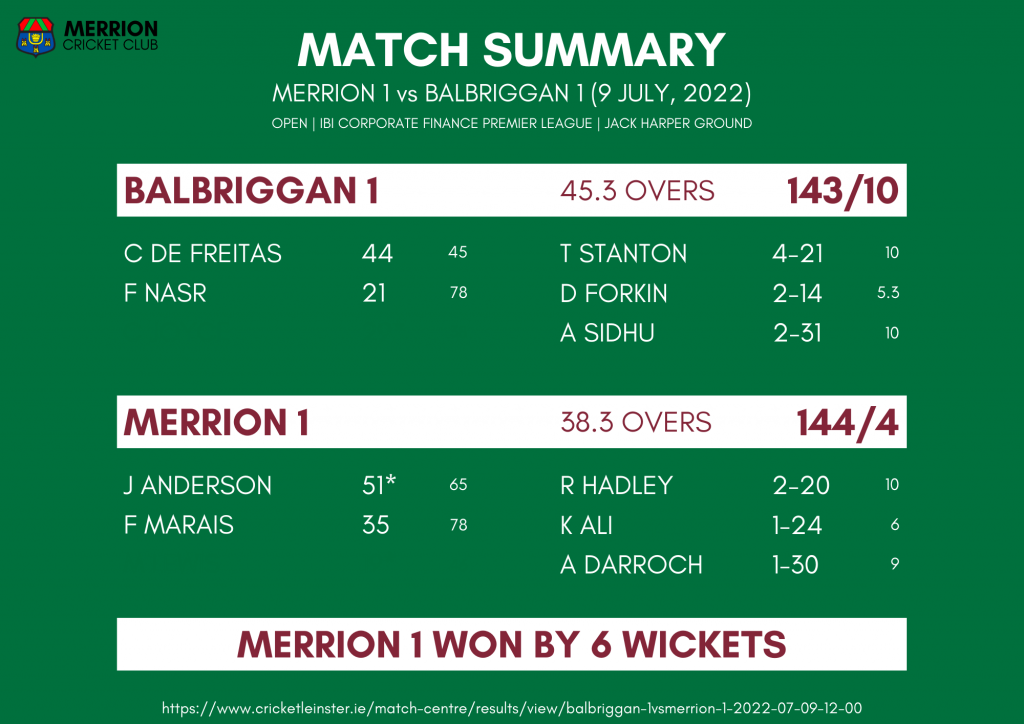 There was another victory for the 1sts, as they beat Leinster 1 comfortably by 37 runs on Tuesday. Batting first, Merrion made 163/6 in their 20 overs. Celeste Raack [53] led the assault, ably supported by Annabel squires [37] and Cecilia Joyce [29*]. Leinster couldn’t come close despite a fighting 58 from Joanna Loughran. Síbha Bhoja impressed with 3/7 off 2 overs. 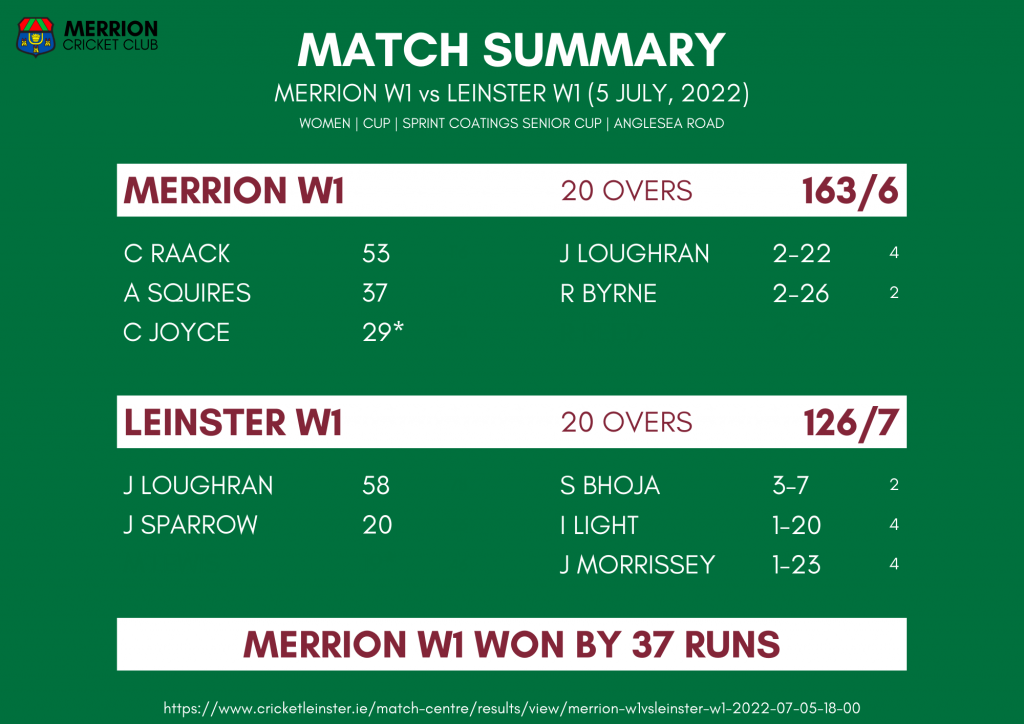 It was a lopsided contest and sort of a mismatch when YMCA 3 faced our 2nds on Sunday. After bowling out YM for a paltry 54, Merrion cruised to victory in just 5 overs. JJ Walsh ended with brilliant figures of 4/14 off his 4. 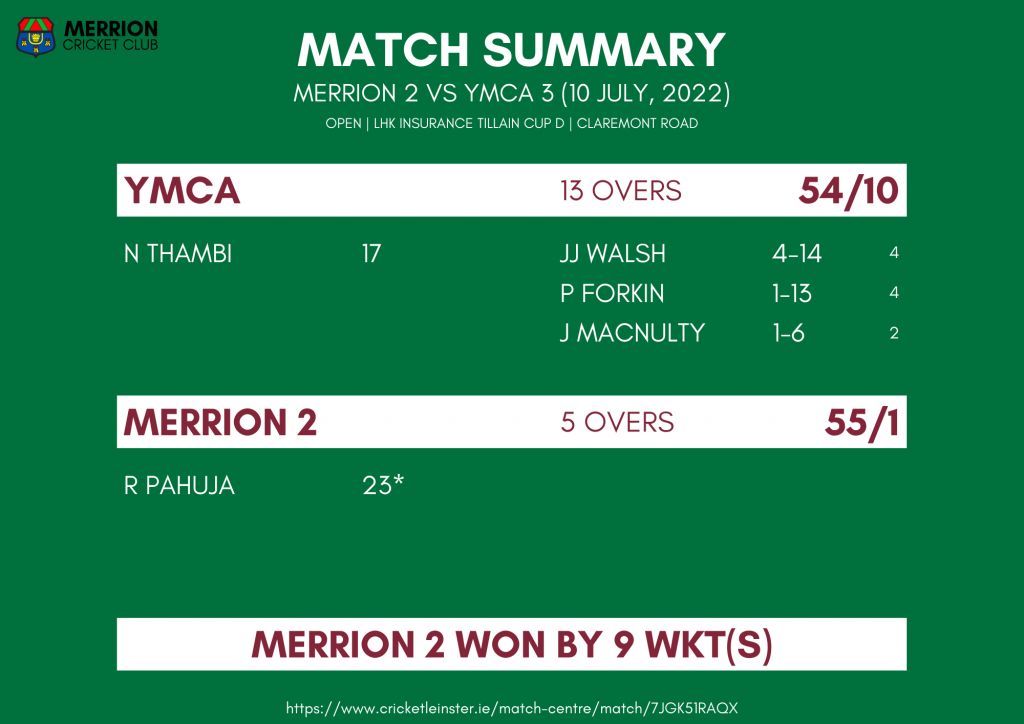 Our 6ths were comfortably beaten by Gorey 1. Batting first, we could only manage 104. Sanjay Pahuja [25] was once again among the runs, Rishabh Sharma [25] being the only other batsman with some runs behind his name. Gorey chased the target in 7.1 overs. 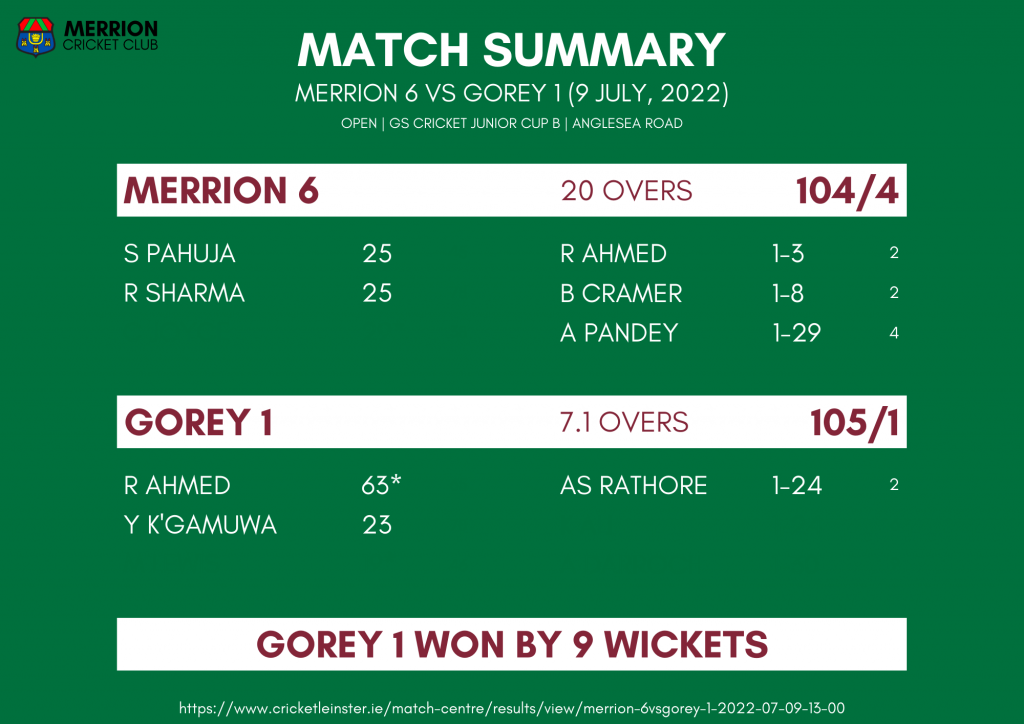 Our 4ths fell short by just 18 runs on Saturday in the LHK Insurance Middle Cup against Tyrrelstown 1. Tyrellstown got to a respectable 138 in their 20 overs, Kunal Kalra [3/23] and Sidharth Muthu [3-14] sharing the spoils. Chasing 138, we could only get to 120, thanks to Himanshu Kamat’s run-a-ball 36.

(Correction: It’s Sidharth Muthu and not Sidharth Kalra in the summary. Also, Kunal Kalra’s figures are 4/23) 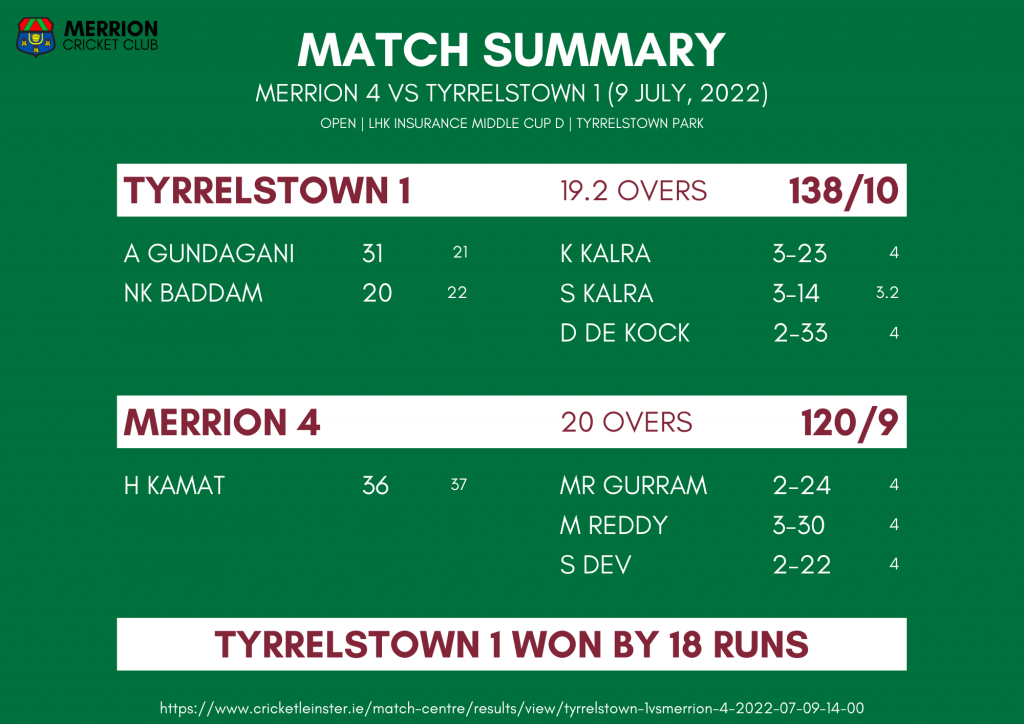 Our 5ths had a double-header and they lost the 1st of those, against a spirited Lucan 2. Merrion dragged their score to an underwhelming 98 (helped by Chetan Suttraway [29] and Liam Casey [29*]) in the allotted 20 overs but it wasn’t enough as Lucan chased it with 5 wickets in hand. 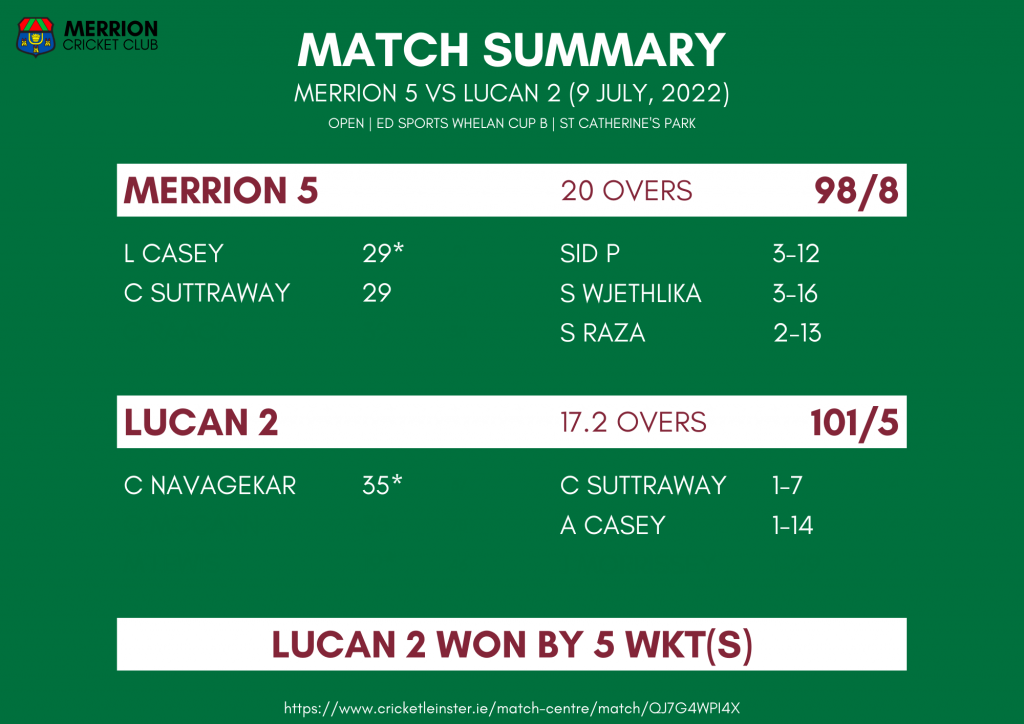 But, come Sunday, the 5ths came as strong victors against Adamstown 4, winning by 70 runs. After scoring an impressive 234/7 in 40 overs, they bundled out Adamstown for just 164 inside 37 overs. Liam Casey [79] was the star with the bat once again, ably supported by Chetan Suttraway [30] as the duo continue to pile runs. 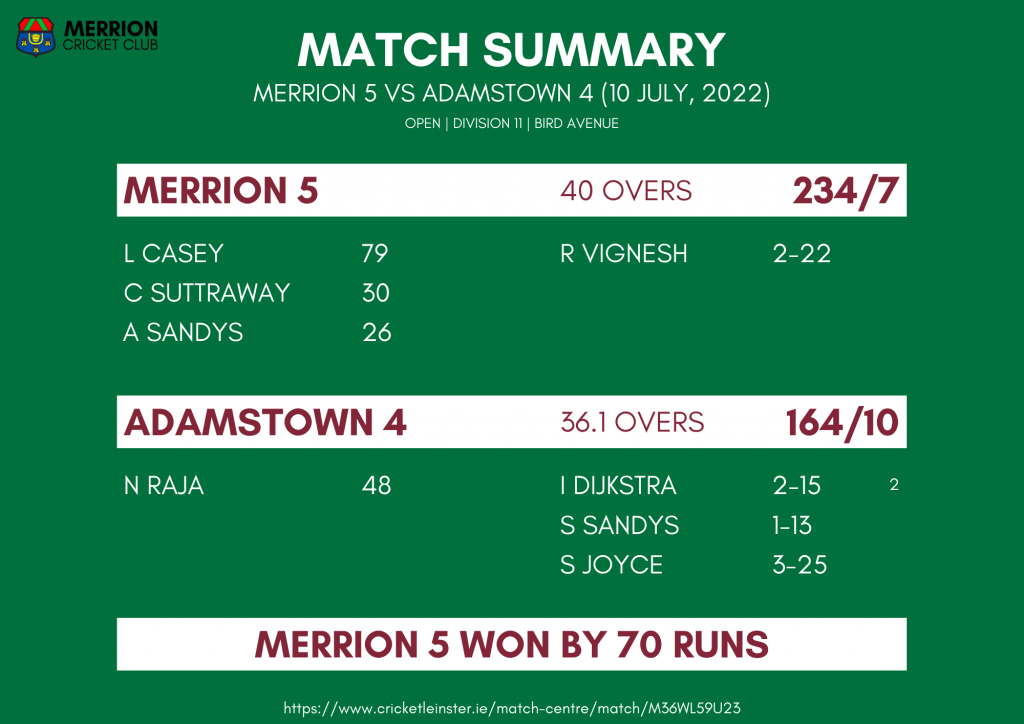 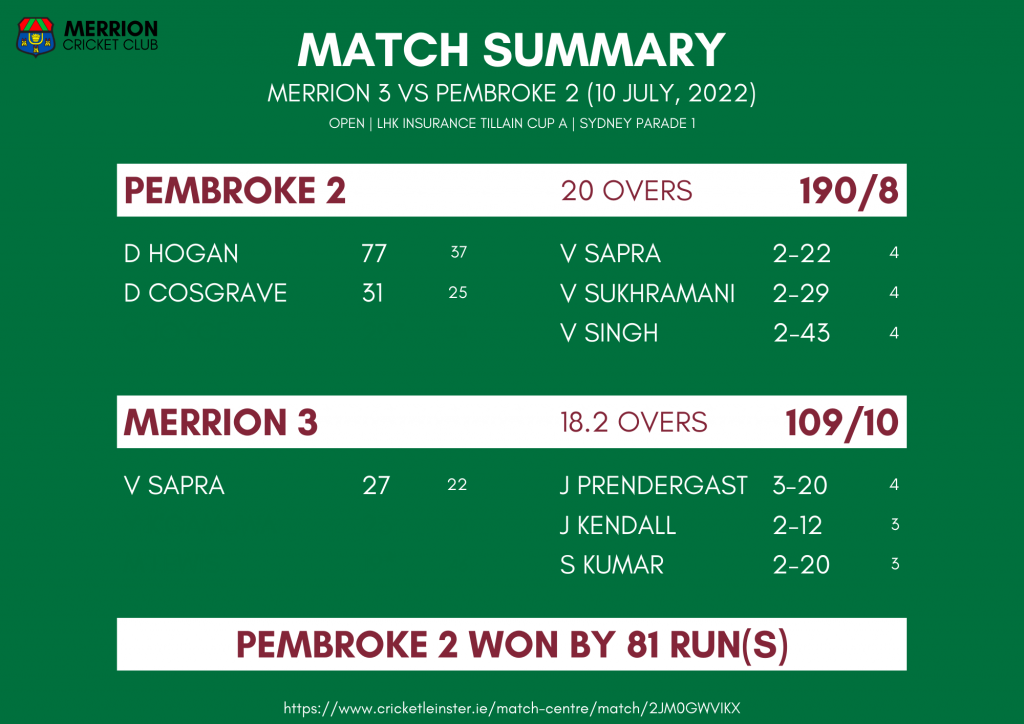 TEAM OF THE WEEK – 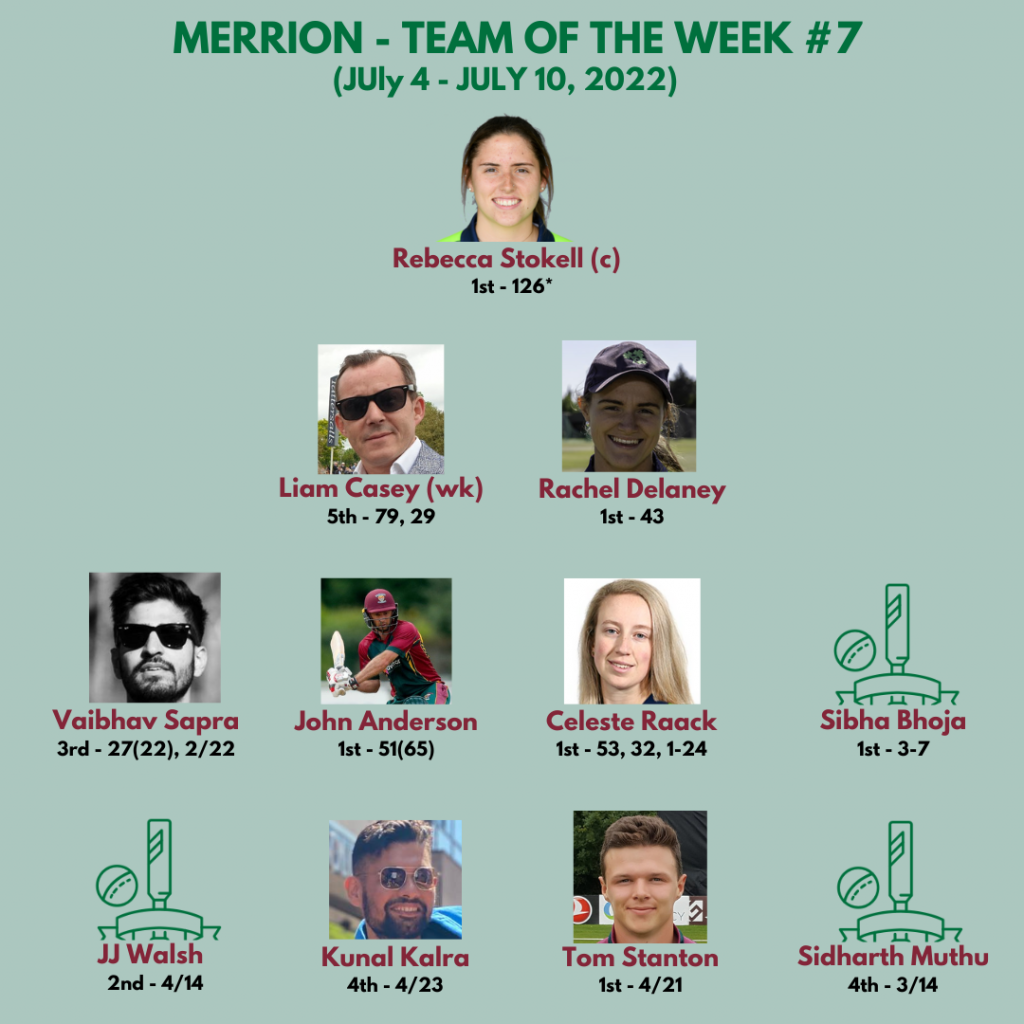