A win in the Premier League followed by a loss in the 2nd Round of the Irish Senior Cup for the 1st XI. It would have been nice to win both but if that was not to be then at least the results are the right way around.

On Saturday the 1sts took on Malahide in an important game. With two teams due to be relegated, this year could see a lot of teams dragged into a dogfight to avoid the drop. The current table is very different from what might be expected with Balbriggan out on their own at the top and Clontarf and Malahide without a win after three rounds. Balbriggan was everyone’s favourite to be one of the fall guys at the end of the season. This adds extra spice to their visit to Anglesea Road next weekend. A win would put them in a strong position to avoid relegation. This would leave the other seven teams looking at each other wondering who will survive.

Returning to the Saturday game. The most notable feature was a 4th over hat-trick by Hugh Kennedy to demolish the Malahide top order. This is by my reckoning only the sixth by a Merrion player since the club entered the Senior ranks in 1926. Indeed you might even discount the first of these by RF McCartan in 1934 as it occurred as the teams played on after Phoenix had won the game [something that was common at the time]. The last hat-trick in the Premier League was by pat Collins for Railway Union against North County in 2014.

After their disastrous start, Malahide fought hard and managed to reach a still below-par 169. Ryan Hackney batted through [69*] for Malahide but there was only a glimpse of recovery when batting with Finton McAllister [23]. Hugh Kennedy’s initial breakthrough was crucial but he ended up sharing the bowling honours with Sean Stanton on 3/35.

Merrion got off to a quick start and did not lose their first wicket until the score was 27. But thereafter wickets fell regularly and the Merrion batting made heavy work of chasing down the Malahide total. That they ultimately secured victory by a margin of four wickets was down to very composed innings by Stephen Doheny [76*] who kept everything together and ensured an important win. 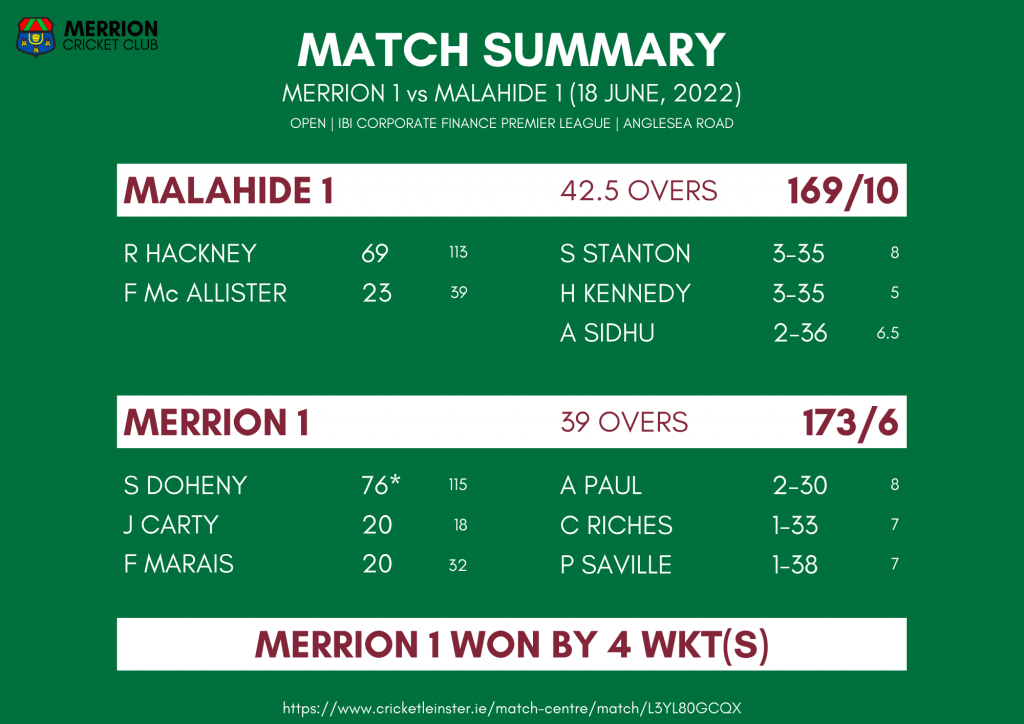 The Sunday ISC match against Clontarf again at Anglesea Road started off in a similar fashion to the previous day. There was no hat-trick but again Hugh Kennedy was in the wickets and supported by Muhammed Sinan at one point reducing the visitors to 3/12. But this time one of the main batters anchored the innings and a superb century by captain Eoghan Delany ensured that Clontarf reached a competitive 229/9 in their 50 overs.

After a flurry of early boundaries, the Merrion top-order was quickly reduced to 50/5. Home supporters’ hopes were raised by a century sixth-wicket partnership between Sean Stanton [46] and Franco Marais [48] but the pressure was always on the batting side and once the partnership was eventually broken the rest of the wickets fell quickly in what was an ever more desperate run chase.

Looking back on the game people will point to the failure of any of the Merrion top orders to make a  telling contribution. But credit must go to the Clontarf new-ball attack for a high-class and sustained bowling performance. The real damage was done in the first innings when Clontarf was six down for 108 in the 32nd over and Merrion was unable to press the attack or withstand the Clontarf counter-attack when it eventually came. In the end, the last three wickets from Clontarf doubled their score in the remaining 18 overs.

Looking on the bright side, this means that the 1st XI can now focus all their attention on what is shaping up to be a challenging league campaign. 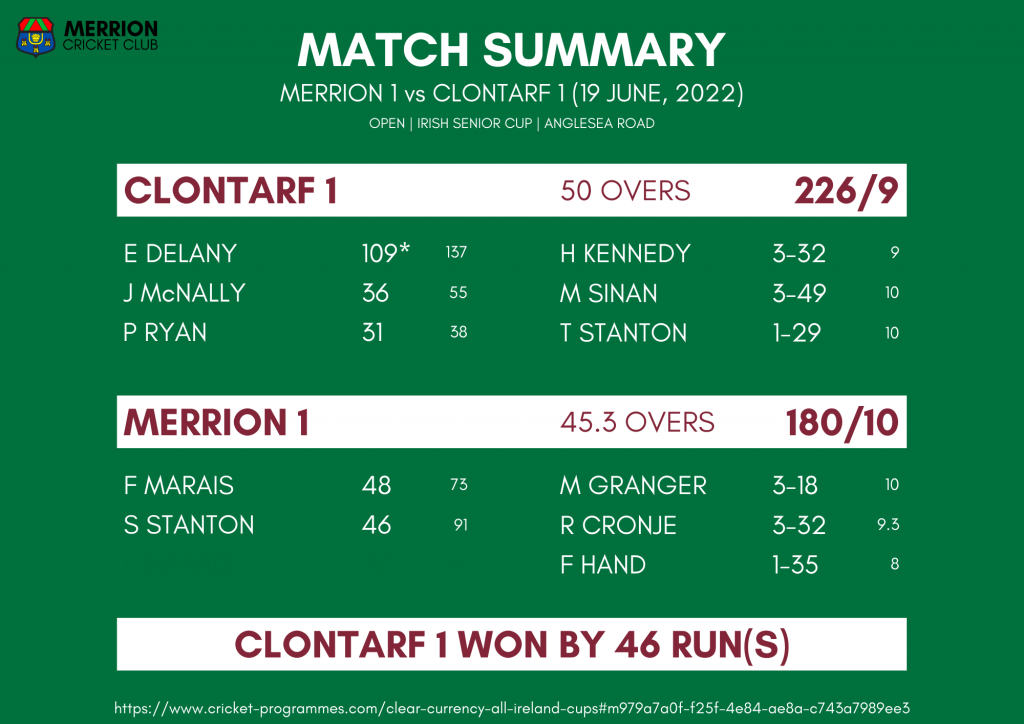 Elsewhere over the weekend, the 5th XI had another win in their T20 competition with a seven-wicket win over Naas. Bowling first, and looking down the barrel of a massive score at 61/0 after seven overs, Isaac Dijkstra [2/8] put in an excellent effort to bring the scoring to a halt and collect a couple of wickets. Chasing 139, a quick-fire knock by Harry Sandys, together with Himanshu Sharma, saw Merrion home. 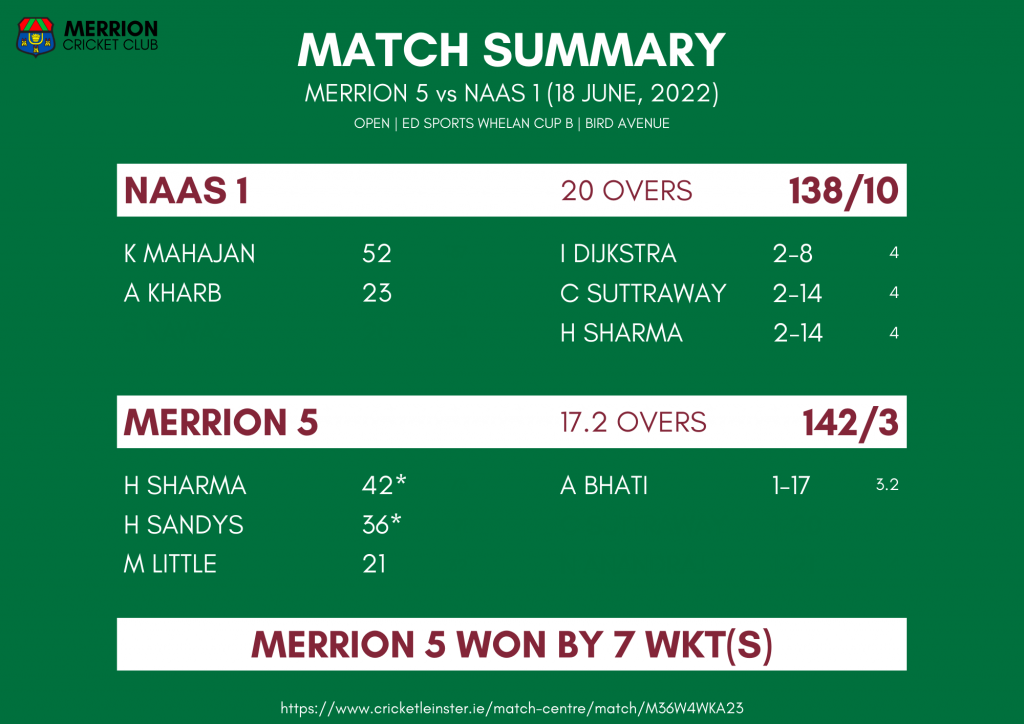 Another seven-wicket win, this time by the 4th XI, saw Merrion beat Clontarf in their D7 game at Castle Avenue. A five-wicket haul by Himanshu Sharma did the most damage but he was well supported by his teammates with the Dijkstra’s, [Isaac 2/18 and Seb 2/40] and Sean Sandys [1/21] all in the wickets. A quick 77 off 85 balls from Hari Ramasetty was the mainstay of the Merrion innings but there was support from Himanshu Sharma [24] before Seb Dijkstra [19*] and Himanshu Kamat [13*] made the game safe for Merrion. 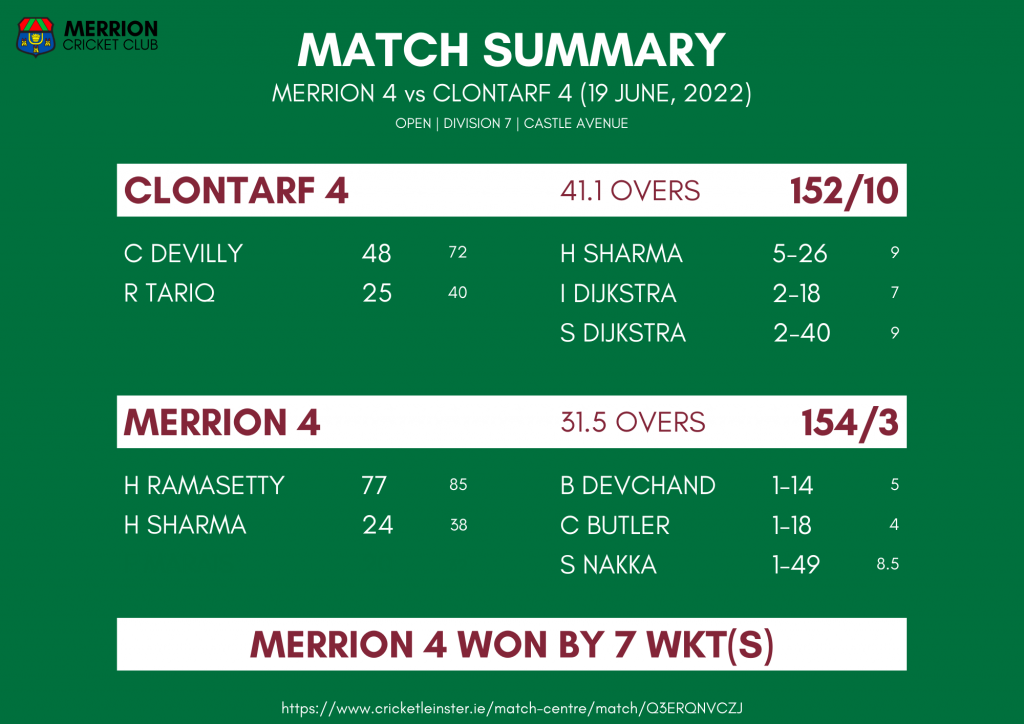 On Sunday in a tight finish against Clontarf in Bird Avenue, the 6ths successfully defended a total of 153 by six runs. Sanjay Pahuja [35] and Majid Hyder [41] made the bulk of the runs with Nigel Bainbridge picking up a couple of wickets. 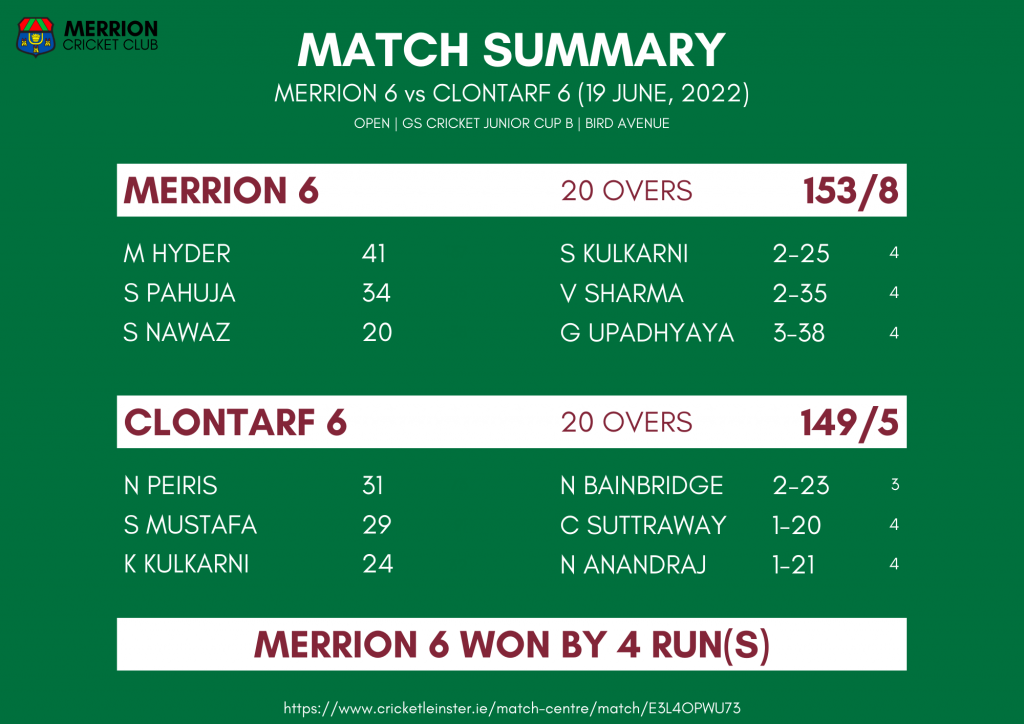 Finally, mention should be made of an excellent win for the U19 against YMCA that might have been missed. A win by seven wickets with Danny Forkin [60*] and Harry Sandys [40*] doing the damage. 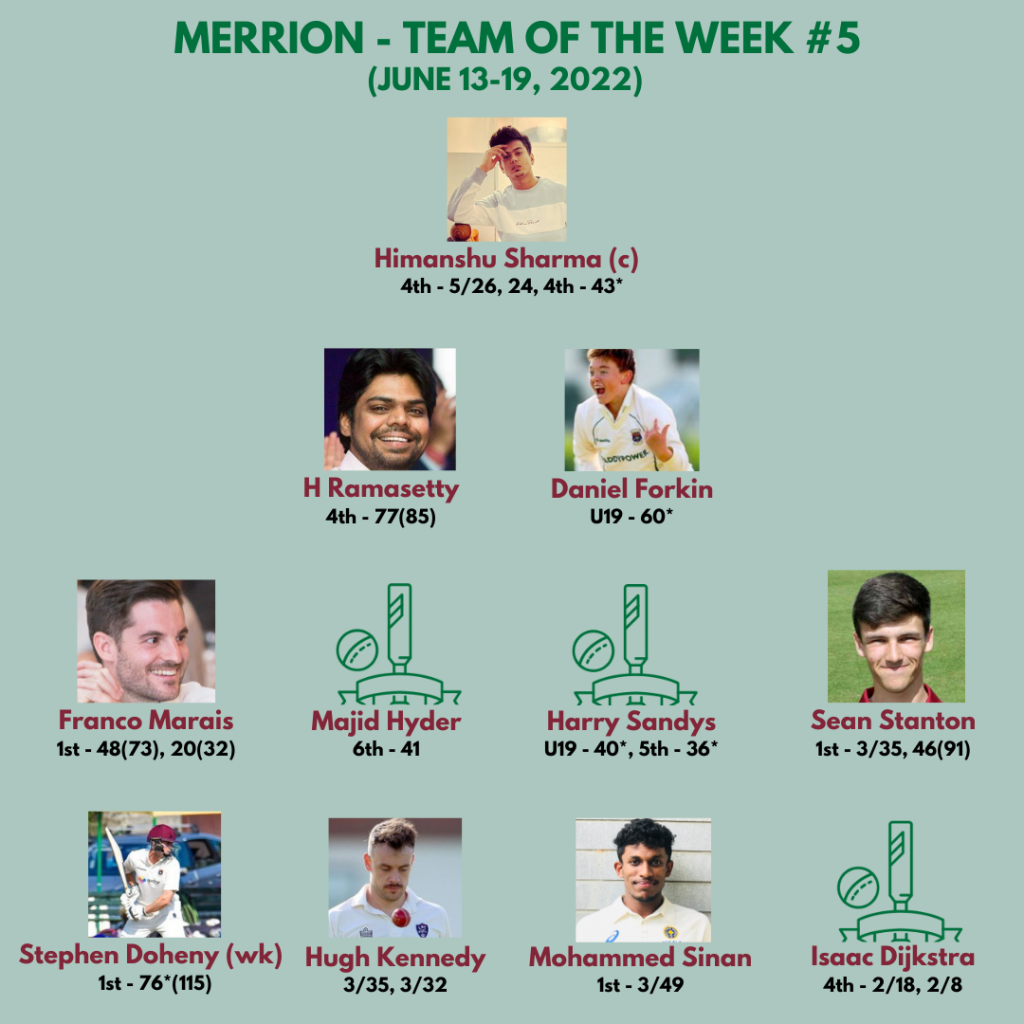