It has been a tricky start to the season for the club in the Open Competitions. But last weekend saw the first indication of improved performances across the board with all teams winning their games.

The top match between Merrion 1st XI and Clontarf 1st  XI in the second round of the Premier League was already billed as an important encounter. Both teams had been successful earlier in the season in qualifying for the later stages of the Senior League Cup but had started the Premier League campaign with a loss. Both sides were without key players on interprovincial duty, but regardless of the circumstances, a second defeat would heap pressure on the losing side. But that side was not Merrion.

An excellent all-round bowling performance restricted Clontarf to 125 all out in 33 overs. Max Neville [2/34], in his first game of the season, and Mohammed Sinan [1/24] did the damage up front, as Clontarf collapsed to 17/4 [including a run out]. And there was to be no let-up with 20 overs of left-arm spin from skipper Tom Stanton [3/19] and  Amish Sidhu [3/47 ] putting the seal on an excellent all-round effort.

Merrion got off to a steady start and reached 60 before the third wicket fell. There were certainly a few nervy moments for the Merrion supporters but solid contributions from John Anderson [31], Swapnil Modgill [27] and Sean Stanton [26] were enough to see Merrion home by four wickets.

An important victory that gets Merrion up and running in a league that at this stage looks very open. It is worth noting that none of the top three teams on the leader board [The Hills, Balbriggan and YMCA] qualified for the league cup semi-finals. There would be fairly long odds on the current table lasting through to the end of the year. 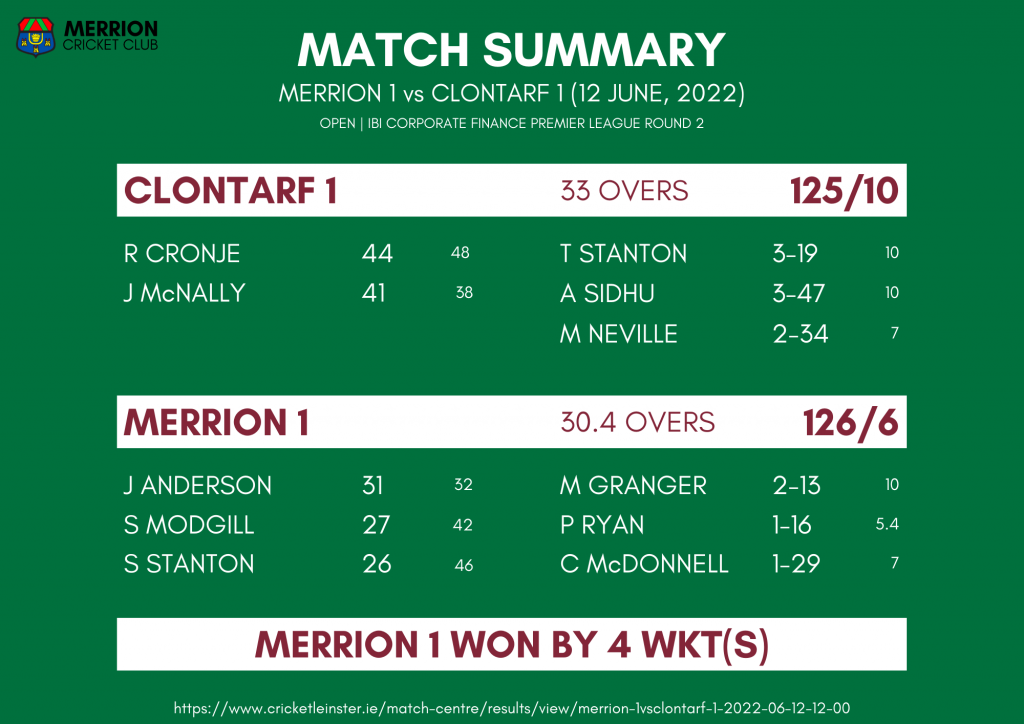 The 2nd XI travelled to Park Avenue to take on Railway Union 2 with a youthful-looking bowling attack. And it did not disappoint with the wickets well spread. Daniel Forkin [3/34] had the best figures but it was a team performance. Up front, there was an economic spell of 8 overs for 16 runs from Garin Howell and everyone else on the wickets, Declan de Kock [1/17], Peter Forkin [2/49]. Oisin Bhoja [1/34] and Conor Austin [1/16]. In the end, RU was all out for 171 in 45 overs.

It was an equally good team effort chasing down what might be counted as an awkward total. Six of the top seven batters got into double figures led by skipper Chirag Poddar [39] and well supported by Bhoja [33]. A second four-wicket victory on the day. After their early loss to Clontarf – who top the league table – Merrion are now lying second. 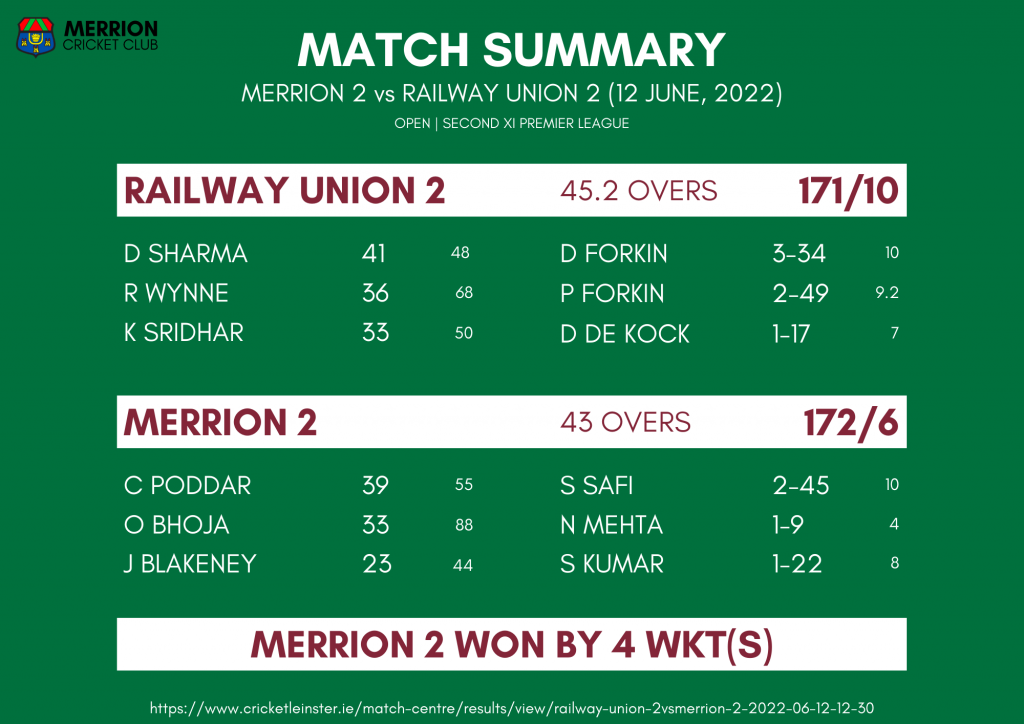 The 3rd XI took on YMCA 3s in Anglesea Road on Saturday. Dominance from early on saw YMCA all out for 83 with three wickets each for Vishal Singh and Declan de Kock. And getting the modest total did not present a major challenge to Oisin Bhoja [61*] and Vaibhav Sapra [13*]. A comprehensive 10-wicket win.

It was an important victory but it is still not enough to move them from the foot of the table. But at least they are now only two points behind YMCA and just behind Clontarf 3 and Knockharley with a couple of games in hand. 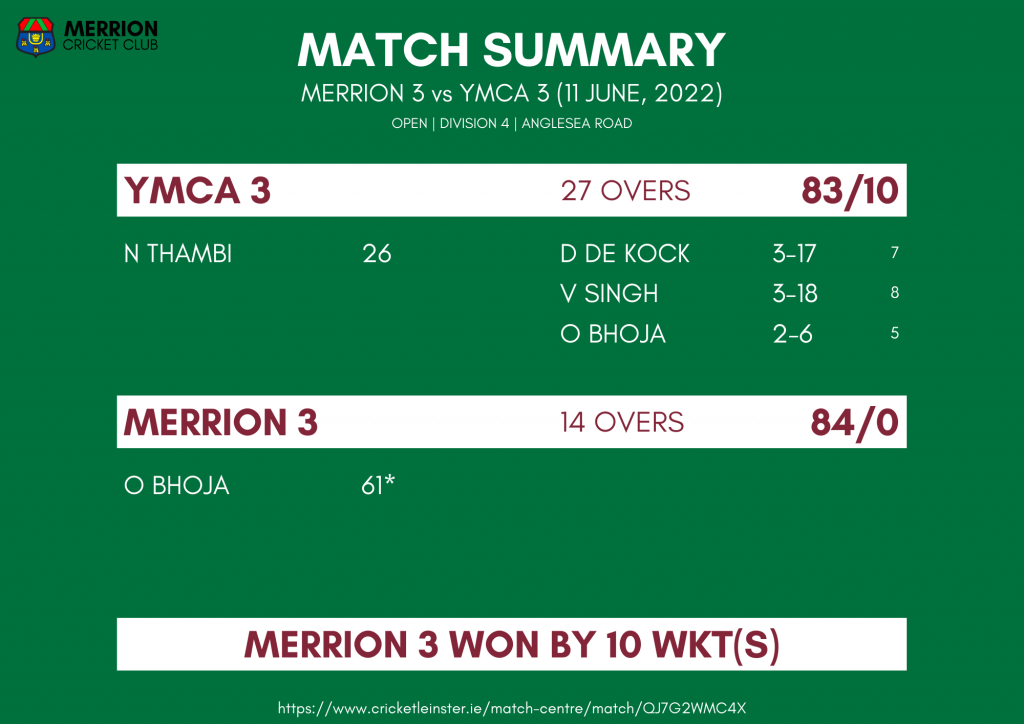 The 5th XI had a double weekend – league and T20. In their Saturday league encounter Rush Merrion managed only 140 / 7 [in Bird Avenue] thanks mainly to a 39* from Liam Casey. It might have felt like a modest enough total but proved more than enough in the end with Rush bowled out for less than 40 – five wickets to Killian O’Flynn and four for Kunal Kalra. 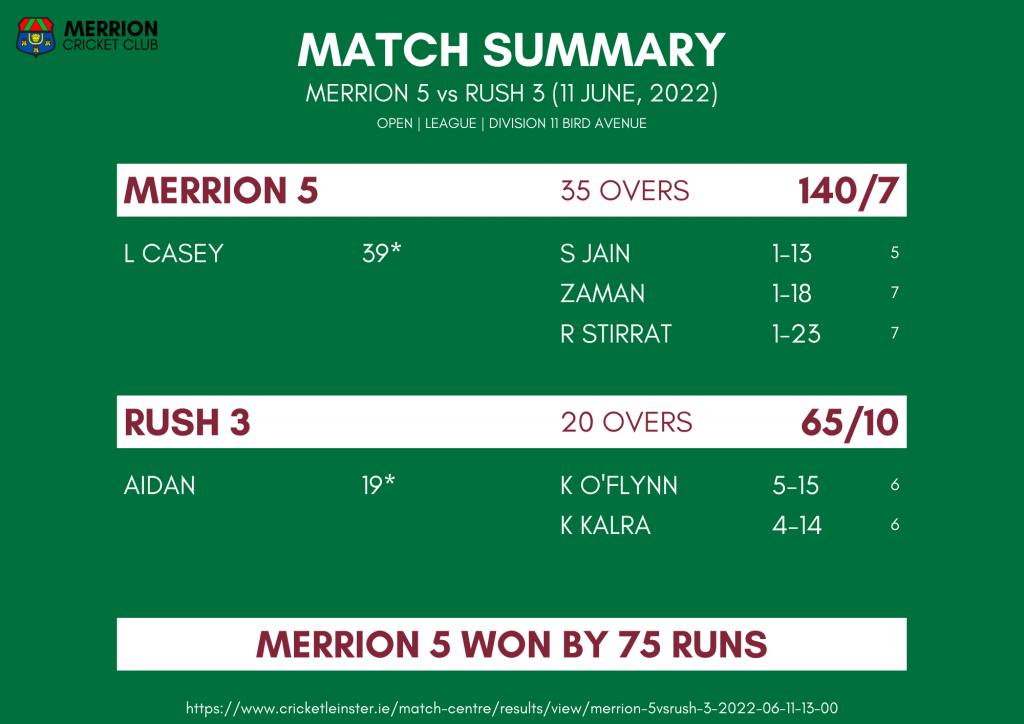 The next day in a second visit to Bird Avenue [which at this point must be counted a home fortress]  Killian decided it was his turn with the bat and made 65* to reach a competitive 159/9 off the 20 overs. AIB in the end fell about 70 short. Liam Casey impressed this time with 4 dismissals. 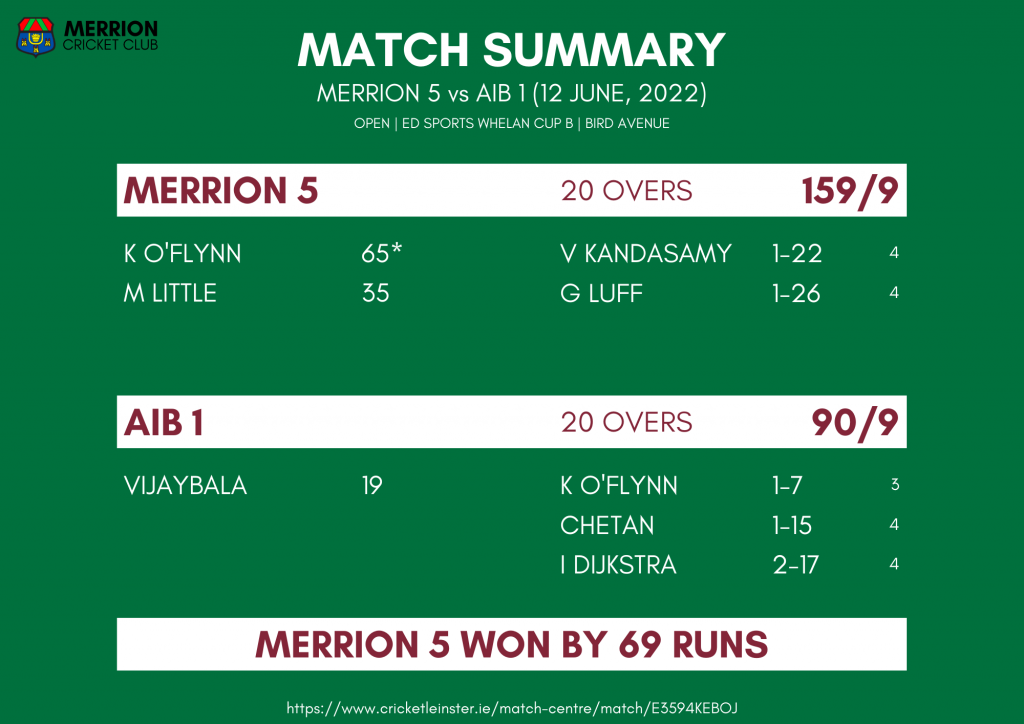 Overall an excellent weekend for the club! 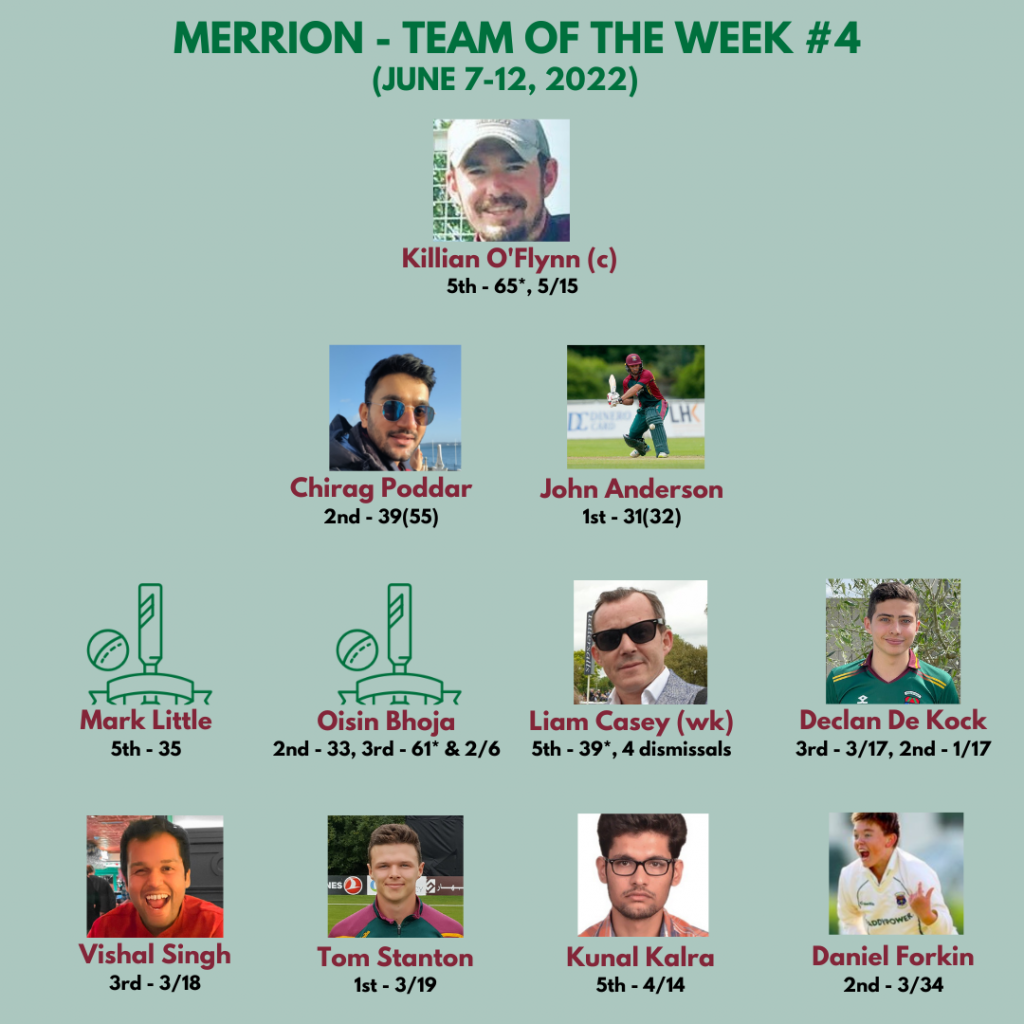