Both the Open and Women’s 1st XI continue their good run of form but other teams struggle. To the end of May teams below the 1st XI have played 22 games winning only 6. Last weekend saw a welcome and well-deserved win for the 4th XI against Swords in the league and a win for the 2nd XI in the Tilllain [T20]. But pride of place must go to the Women’s 1st XI who hung in to beat neighbours Pembroke by 1 run, defending 151.

Earlier in the week, the Women’s 2nd XI had a close game against Clontarf 2s, only losing in the final over. Sorcha Cunningham just failed to get a 50, being not out 49 at the end of the innings. A young bowling attack took five Clontarf wickets but just failed to defend a total of 108. 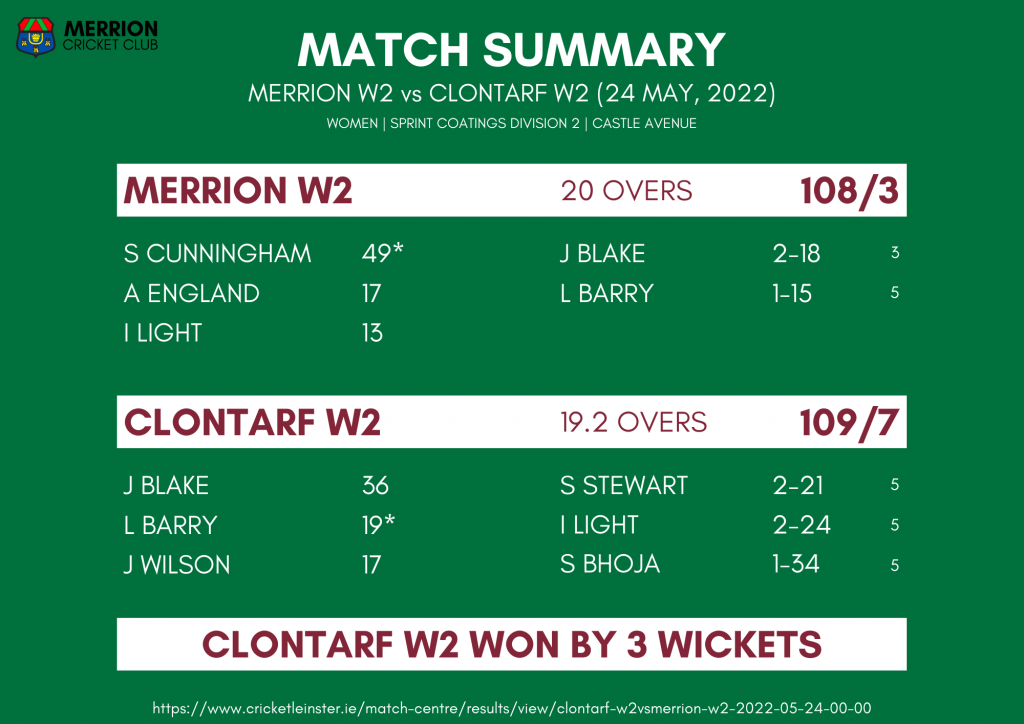 On Thursday spectators in Sydney Parade were treated to an absorbing contest between two of the strongest sides in the league. Merrion batted first and suffered an early batting collapse. But a partnership between Leah Paul [77] and Rachel Delaney [33] recovered the innings which eventually ended at 151/5 after the 20 Overs.

In very tense second innings, Pembroke seemed to be gaining the upper hand thanks to half-centuries from Clare Shillington and Shauna Kavanagh. But Merrion managed to hang in and in a dramatic final over bowled by Niamh McNulty got home by the closest of margins. With Pembroke needing 6 off the final ball Kavanagh launched the ball skywards and just failed to clear the ropes. A win by just one run! 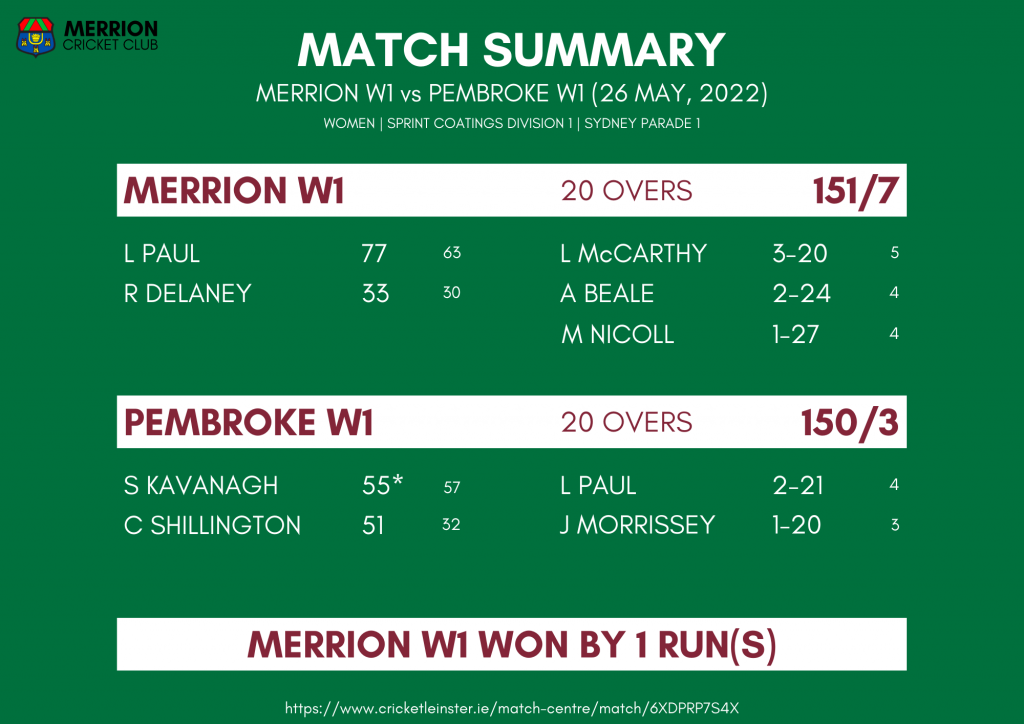 Needing a victory to guarantee qualification to the knock-out stage, the 1st XI travelled to Cork much depleted in strength. The batting line-up in particular looked vulnerable, with five of the six players in the batting order for the first match of the season unavailable.  And certainly, at one point it looked like Merrion might suffer for this as early wickets fell but contributions down the line and an important 41 from debutant Franco Marais allowed Merrion to post a respectable 204 ao. Franco was ably supported by Muhammed Sinan [29] and Peter Forkin.

With a competitive total to defend the bowlers quickly hit their straps and Muhammed Sinan, as he has done all season, ensured an early breakthrough. But it was the introduction of Amish Sidhu  [4/20] to the attack which turned the game decisively in Merrion’s favour. In the end, Merrion secured a comfortable 102 run victory and a place in the semi-finals this weekend against Pembroke [A]. 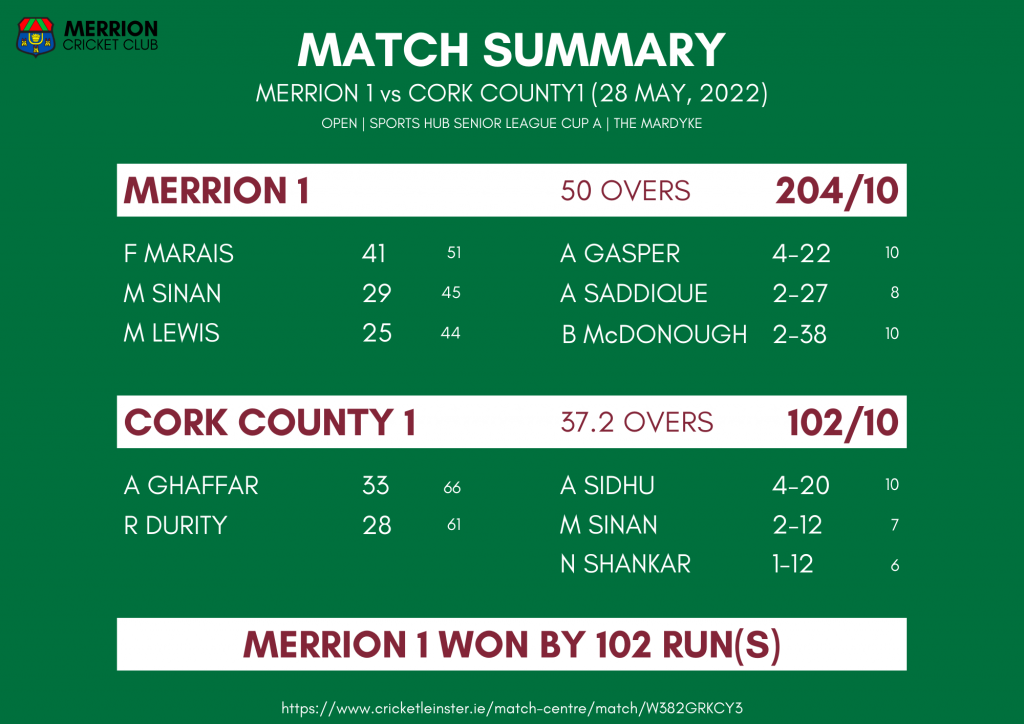 The 2nd XI opened their T20 [Tillain Cup] campaign with a hard-fought victory over North County 2. Batting first they got off to a good start with Grant Glutz [22] and Rohit Pahuja [27] putting on 47 for the first wicket. A mini-collapse followed and it was left to Chirag Poddar [33] and Daniel Forkin [27*] to bring the score to 138/5 and give their bowlers something to work with.

With Tariq Iqbal [2/26] leading the way Merrion quickly got on top but North County fought back without ever taking back control. A youthful spin attack, Peter Forkin [1/24], Oisin Bhoja [2/18] and Daniel Forkin [1/20], held North County to 124/7 and a 14 run win. Special mention to fielding brilliance from Conor Austin – a brilliant direct-hit running in from cover-point, and Akshay – a fine catch at cow corner. 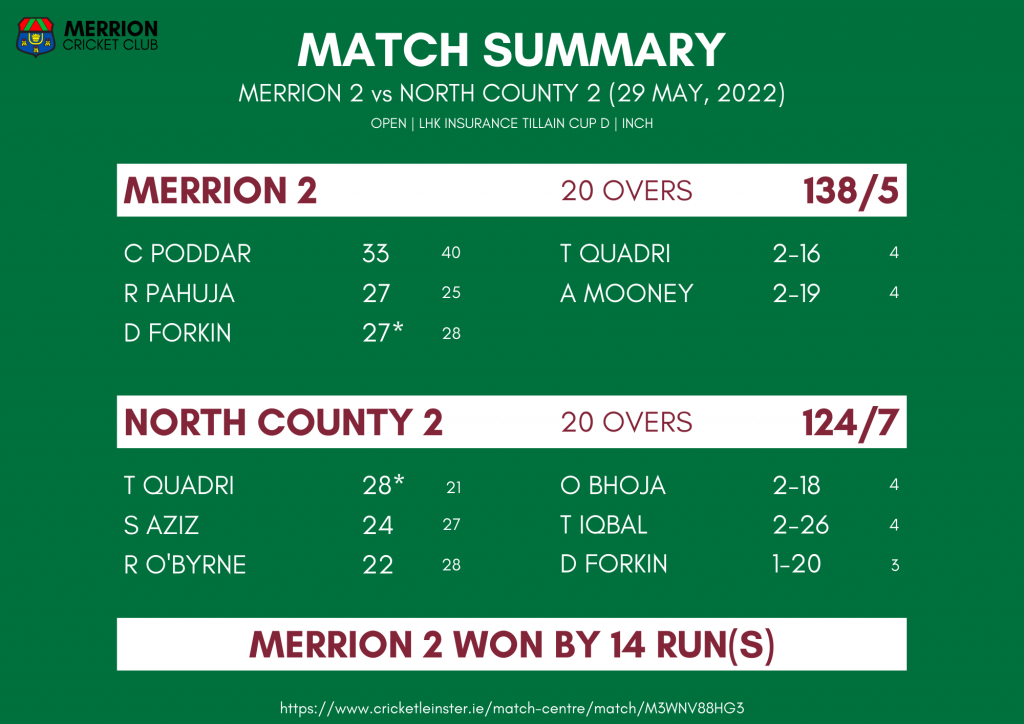 With Merrion’s 3rd XI playing in the Tillain Cup and coming up against the 2nd XIs of clubs with teams in the Premier League, a few mismatches were inevitable. Clontarf 2s had earlier in the season demolished Merrion’s 2nd XI and their overall strength provided too much. Having been bowled out for 90, it took Clontarf only 7.5 overs to knock off the runs for the loss of two wickets. 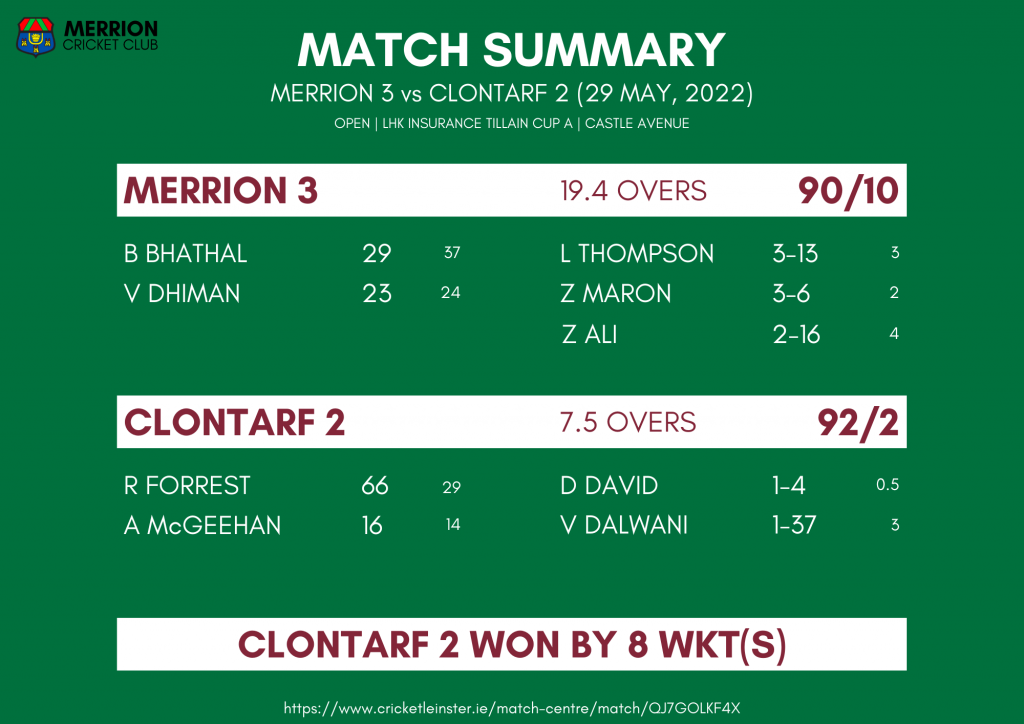 A similar fate befell the Merrion 6th XI who were bowled out for 92 against North Kildare 4s and lost in 11 overs by nine wickets. 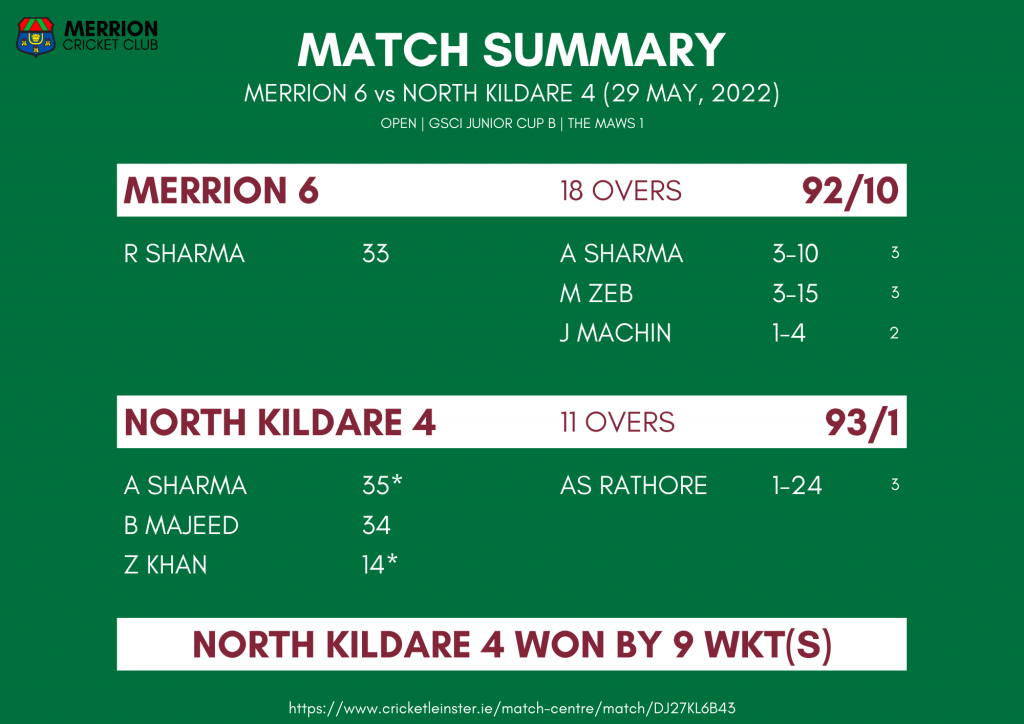 In their Division 13 game on the previous day, the 6ths put up a much better performance in scoring 198/9 in 40 overs, mainly thanks to 83 from Sanjay Pahuja. But it was not to be enough with Terenure 3s winning with four overs to spare by five wickets. 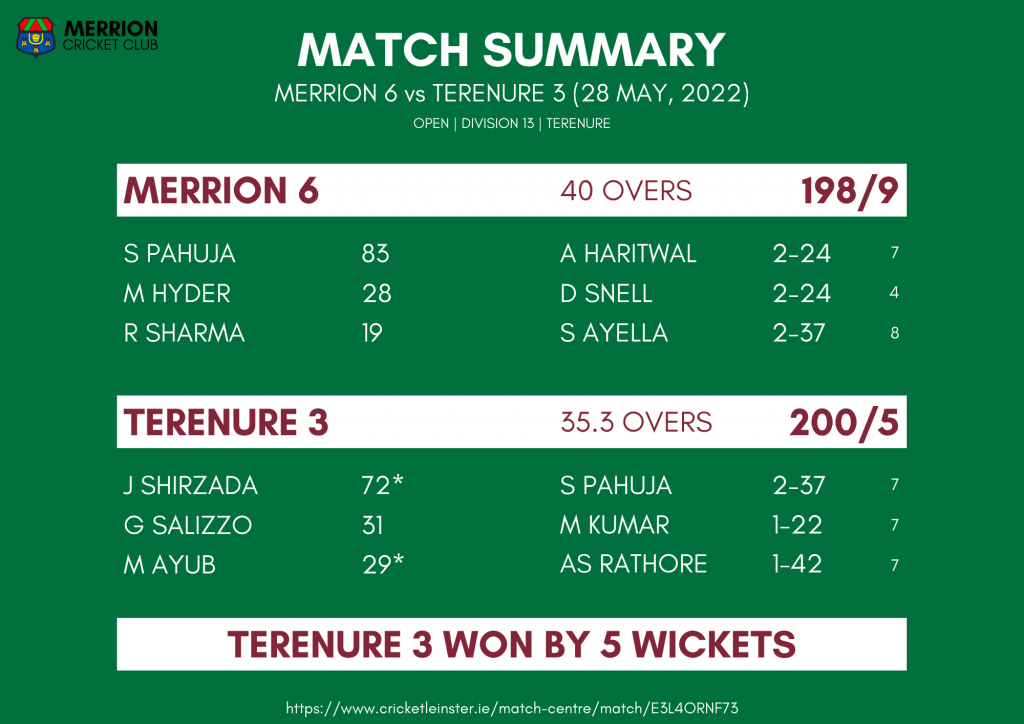 The 4th XI also had two games over the weekend. On Saturday they travelled to Kilkenny and were put to the sword in the field as the home team made 181/4 in their 20 overs. With only Tariq Iqbal [33] and Andrew Kay [22] making significant contributions with a score of 99/8.

But the 4s reserved their best performance of the season in their Sunday league game against Swords. A small group of spectators at Anglesea Road were treated to an excellent fightback as Merrion managed to chase down a large total of 246/5. the pick of the Merrion bowlers was Isaac Dijkstra [3/40] but at the midpoint, things were not looking good for the home side.

A couple of early wickets in the second innings did not aid the cause but when Himanshu Kamat [93] joined Bob Stanton [73] the pair wrestled the game back in Merrion’s favour and their century partnership ensured a welcome victory for the 4s by five wickets. 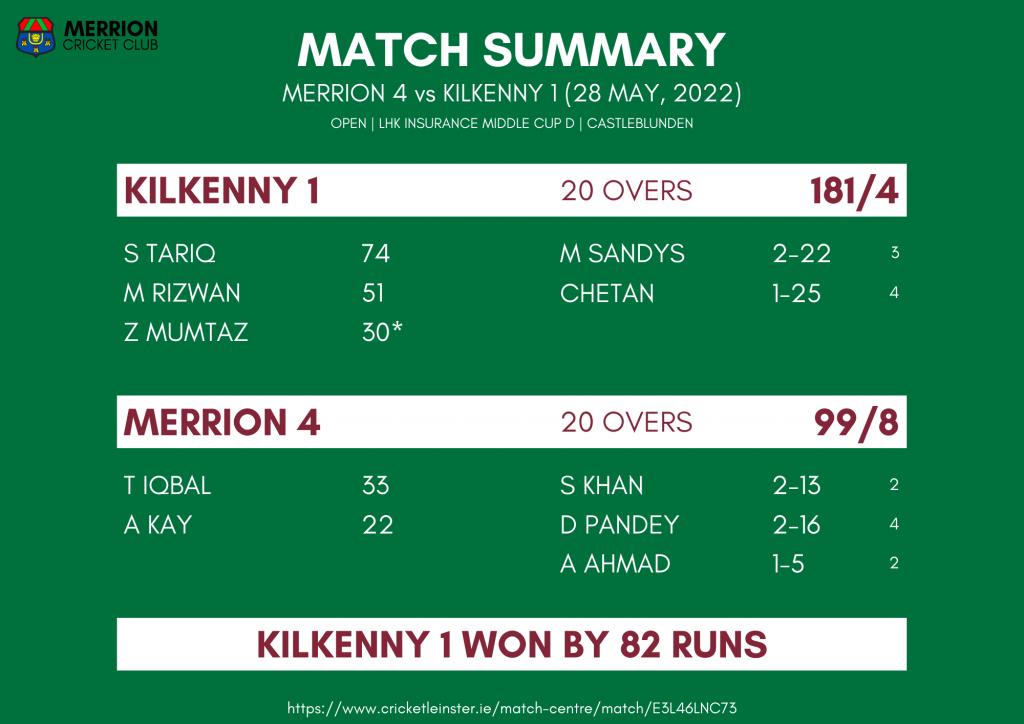 The team of the week follows the usual batting order – batsmen, wicket-keepers, all-rounders, and bowlers. Congratulations to everyone selected. Notable mentions who almost made it to the team, only to be kept away by some strong performances – 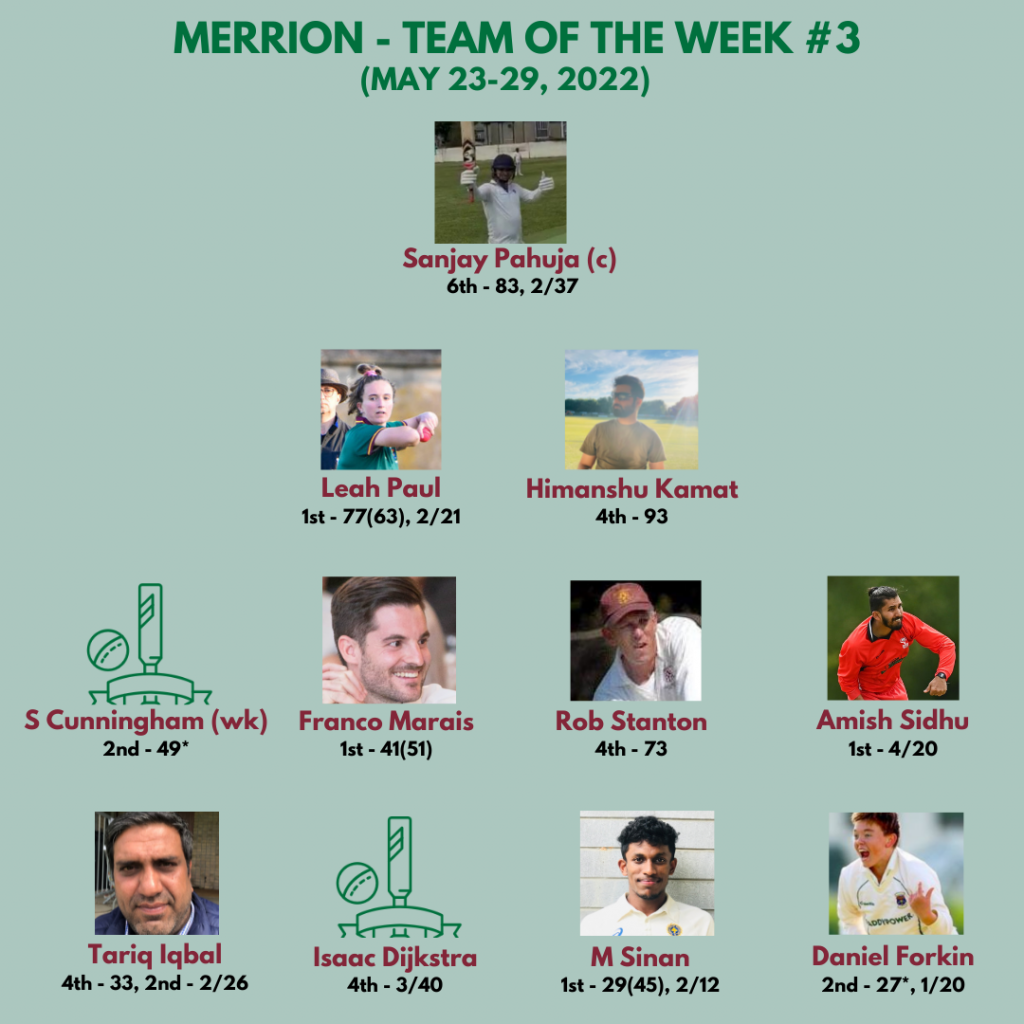