With a full month of the season behind us, a picture is emerging of strong performances by our Open and Women’s 1st XIs but [excepting perhaps the Open 2nd XI] poor results down the club.

Over the last two seasons, all the Open teams won their respective leagues at least once. As things stand at the moment that looks like a very distant prospect for 2022. Part of the reason for this may be the inability to field full teams early in the season. But why this should impact Merrion more than other clubs is not clear.

The past week sees a repeat of what has gone before. The Women 1st XI had a comfortable win on Thursday against Phoenix in the league and the Open 1st XI won their two games over the weekend. All other teams lost.

So, let’s start with the Women’s game away to Phoenix. The bare bones of the story are that Merrion [with a somewhat depleted batting lineup] batted first and made 132/6, thanks to Rebecca Stokell’s 42(33). They then held Phoenix to 76/6 in their 20 overs to win by 56 runs.

Perhaps the more interesting story is the effort the team and captain Celeste Raack have made this season to integrate younger squad players and to ensure they have a role to play in each game. This can often be a challenge in women’s cricket which tends to be dominated by a few players. It was therefore pleasing to see a revamped batting order that gave the youth a chance and with just about everyone getting a bowl [the space in the scorebook was exhausted]. Hopefully, this will prove a useful experience in the more testing matches still to come. 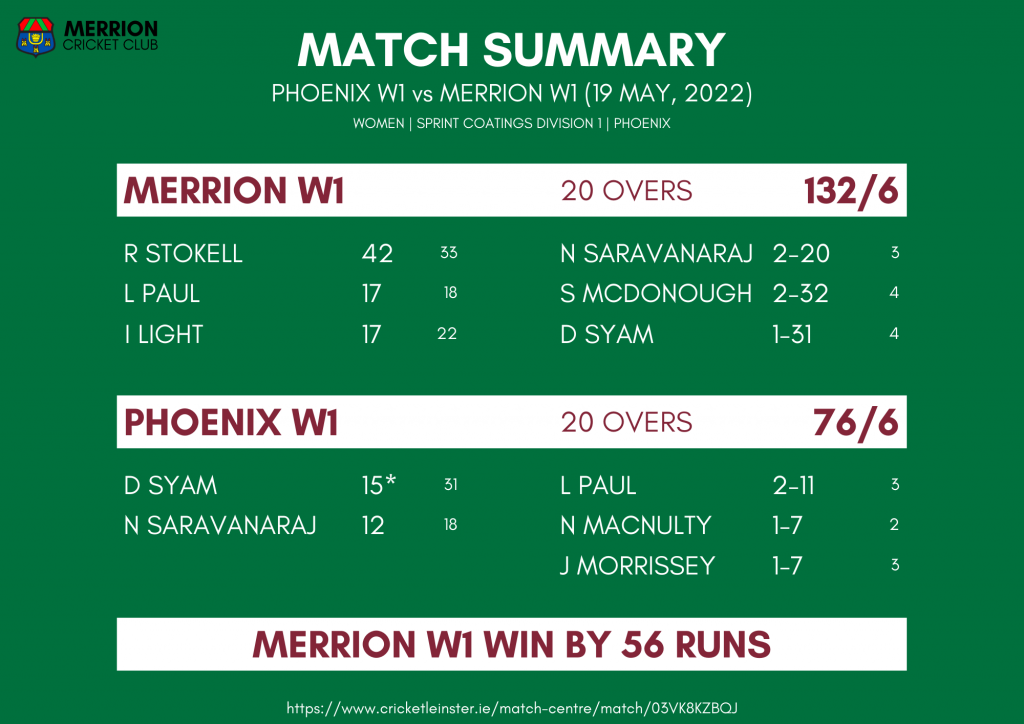 The Open 1st XI has a different problem. A series of easy victories at the start of the season has meant that many in the team are short of batting practice in the middle. This was clearly demonstrated in Saturday’s Irish Senior Cup match against Coleraine. Getting first use of the wicket for only the first time in the season, Merrion made 341/5 but still only involved the top four.

The highlight of the innings was another ISC Century for John Anderson, his 7th. With a batting average going into the game of just under 90, this is clearly competition to his liking. He has scored more runs in the competition than anyone else over the past 20 years [records being in 2003] and this century extends his aggregate total to over 2200 – nearly 500 more than the next on the list who happens to be Dom Joyce. John was well supported by Stephen Doheny 86(112) and Swapnil 69(36)

Even on an excellent [hybrid] wicket, chasing down over 340 runs was always going to be a daunting task. And so it proved. Coleraine started brightly and for a short period managed to keep up with the required scoring rate, but with the introduction of spin, the inning fell apart. The main threat came from Amish Sidhu whose five wickets at a cost of 12 runs puts him on the Honour Board for best bowling performances in the ISC at joint 15th. Merrion ended up winners by 212 runs.

With several familiar faces missing from the batting order on Sunday, the trip to Rathmines to take on Leinster could easily have ended badly. Indeed for the first 10 overs, Leinster took control of the game and was scoring at nearly six an over. But again spin proved decisive. The introduction of Niranjan Shankar began a collapse that saw Leinster bowled out for 145. Tom Stanton finished with an impressive spell of 3/11 off 6.2 overs. In the end, eight wickets fell to spin.

This was still a test for a restructured batting order with little time at the crease so far this season. And the tension raised a notch with the early departure of Jack Carty. But a ninety-two run partnership between Niranjan Shankar [51*] and Sean Stanton [41] made sure that there were no upsets and Merrion ended comfortable winners by eight wickets.

The match also saw the senior debut of Franco Marais and Chirag Poddar, who took three catches as wicketkeeper.

The 3rd 11 had a comfortable victory against North Kildare. NK was restricted to just 95 in their allotted 20 overs – some tight bowling from Anna Fox 2-15. Merrion raced to the finish line – S Cunningham (35) and J Douglas (36) both retiring out after an impressive batting display. 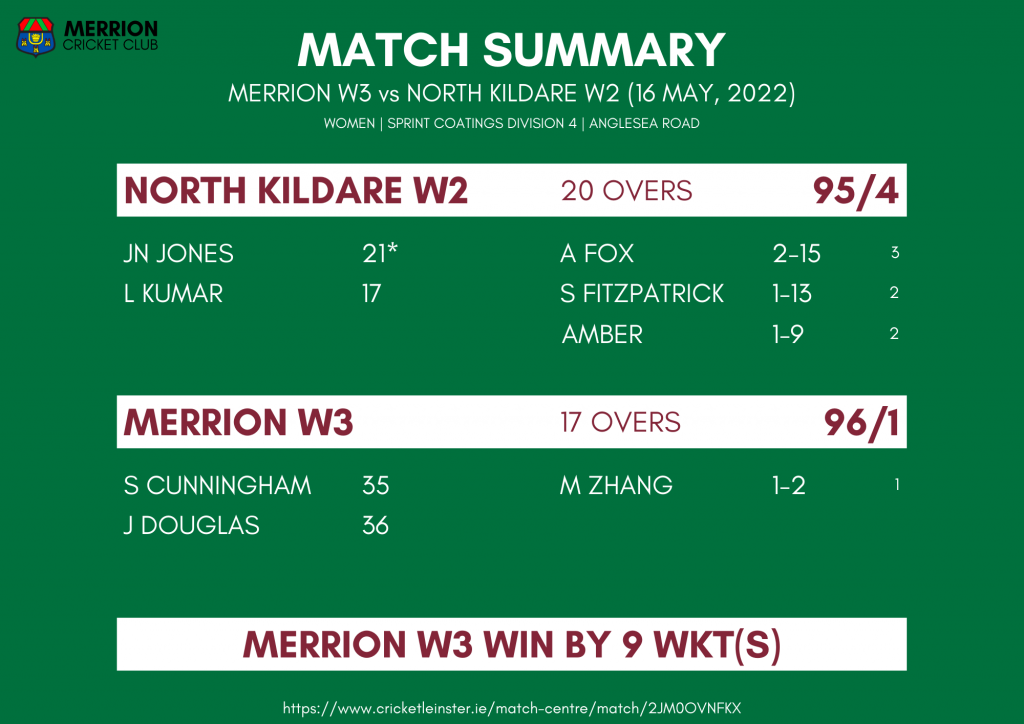 The 4ths travelled to Carlow and once again this season they were forced to chase a large total. The one promising aspect of this was that the youth trio of Seb Dijkstra [4/54], Declan de Kock [3/31] and Isaac Dijkstra [1/29] took eight wickets between them.

The response from Merrion when it came time to bat was determined and with Himanshu Kamat [80] leading the way there was a chance of victory but in the end, the innings closed 19 runs short.

Back at Anglesea Road the 3rds were in action against a Clontarf 3rd XI. This was the third time the clubs have competed this season – with the 1st and 2nd XIs coming off worst. Unfortunately, despite it being a close game, the 3rds did not fare any better.

Despite an early batting collapse, the middle and late order boosted the total to a healthy 243 all out in the 49th over – valuable runs from Akshay (44) and Tariq Iqbal (36). Early inroads into the Clontarf batting saw them reduced to 70 for four wickets, but once established the visitors found runs easy to come by and overhauled the Merrion total in only 39 overs.

The team of the week follows the usual batting order – batsmen, wicket-keepers, all-rounders, and bowlers. Congratulations to everyone selected. Notable mentions who almost made it to the team, only to be kept away by some strong performances – 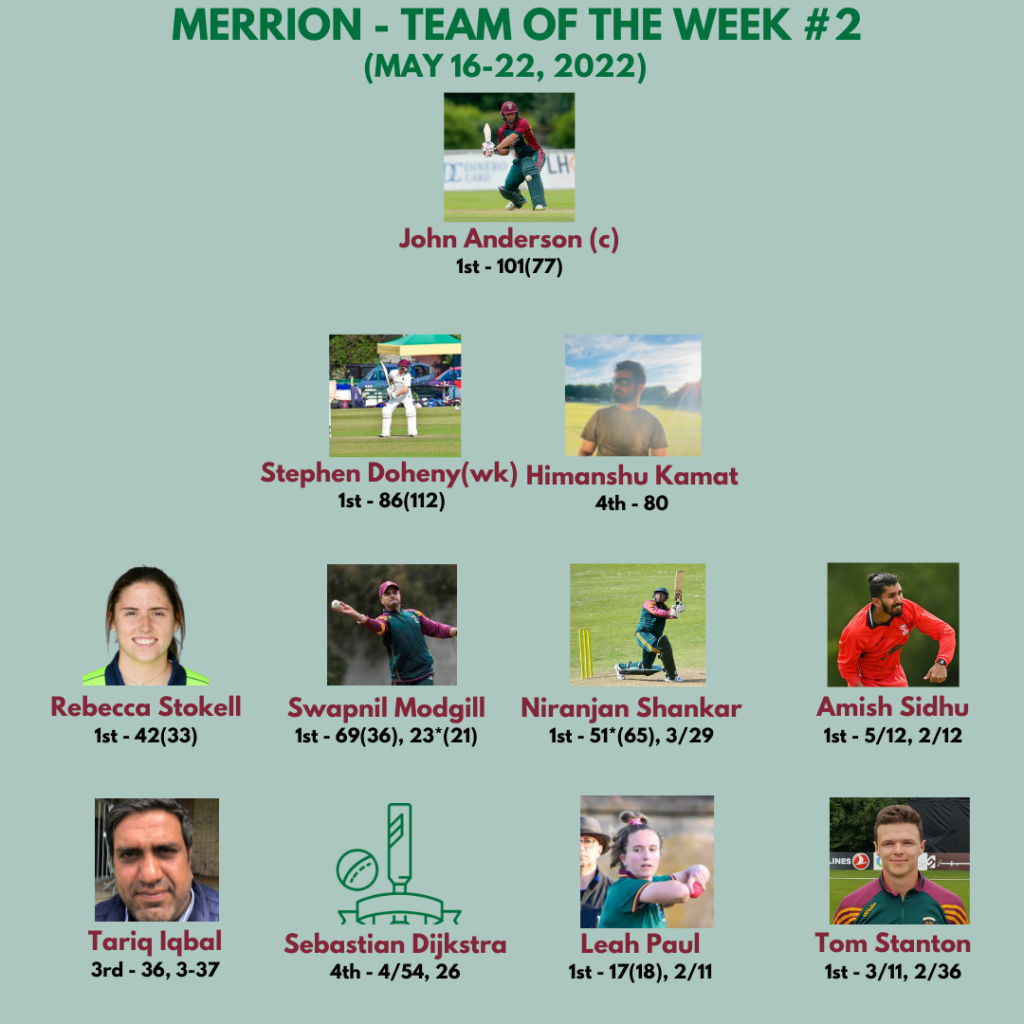