It has been a difficult start to the season for teams in Open Competitions with only the 1st XI getting off to a good start. Although the number of players registered for the club is at a reasonable level [77] several regulars have been unavailable due to holidays, work or studies. So there is much work to do to catch up.

The 4th XI who had a torrid start to the season being hit for 300 plus runs twice, kicked started their season with an excellent 27 run victory over a fancied Bagenalstown side in Division 7. An all-around performance from Seb Dijkstra in his first game of the season [23 and 3/22] was the star turn but a late order contribution of 35* from Killian O’Flynn was crucial to posting a competitive score. 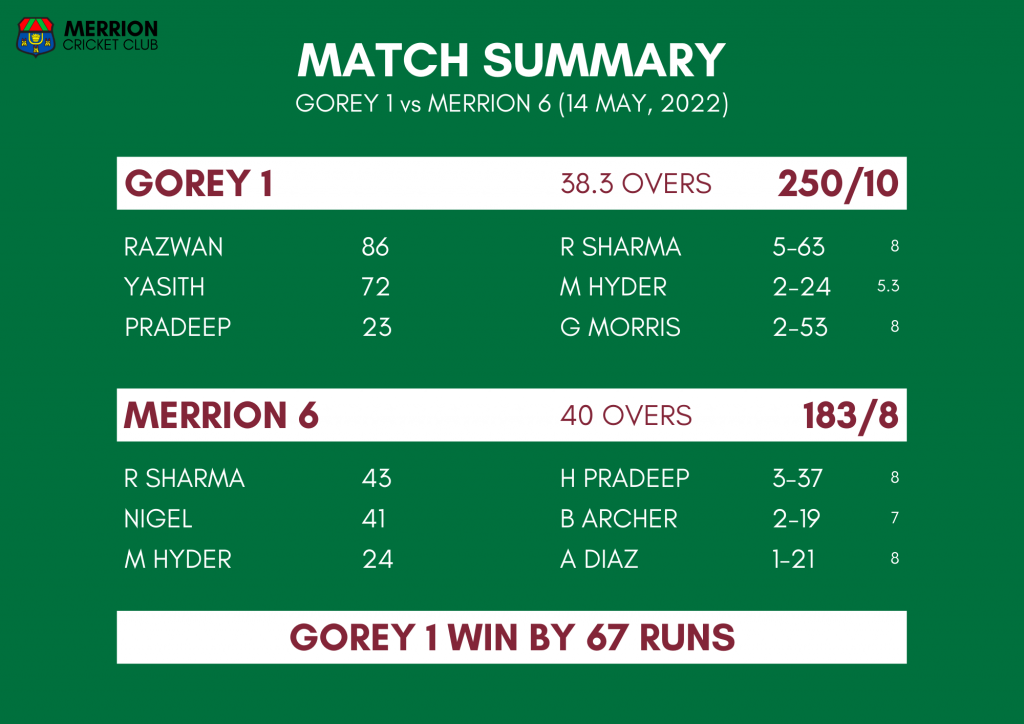 The 1st XI had an excellent start to the season with three fairly comfortable victories in the League Cup. But on Saturday they met a Clontarf side in a top of the table clash and were well beaten. For the fourth time in a row, Merrion fielded first and got early wickets. But runs from David Delany [56] and Ruan Cronje [71] recovered the innings and despite losing late wickets Clontarf was bowled out for 255. The wickets were spread around with Muhammed Sinan having the best figures of 8.5 overs 2/23. Eighteen wides, two no-balls and some poor ground fielding did not help the cause.

Despite losing an early wicket the top order batted well – Stephen Doheny [50], John Anderson [31] and Swapnil Modgill [39] all made contributions. At 125/2 Merrion were in a strong position but thereafter the innings imploded and eight wickets fell for 53 runs. A heavy loss by 77 runs. 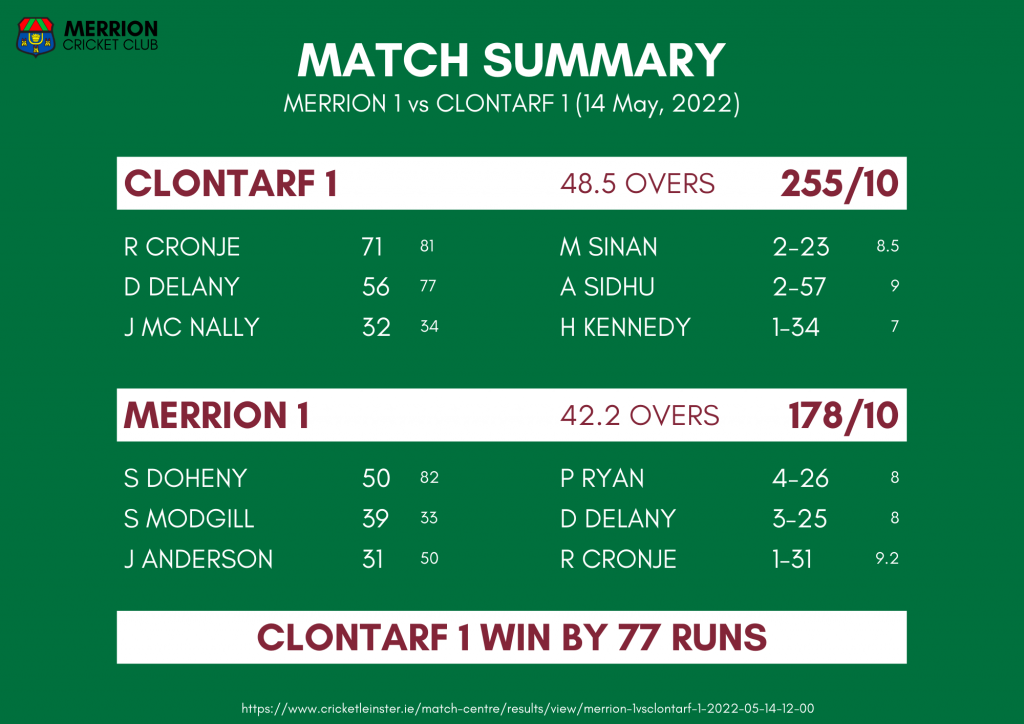 The 2nd XI started the season with a heavy drubbing by Clontarf but made up for it by beating Malahide 2nd XI. But momentum is everything and the match last weekend against the highly-rated YMCA at Anglesea Road was important if the team was to look forward to competing for honours. As it turned out they won the closest of encounters by one wicket with the last pair at the wicket. The visitors batted first and at 150/3 were in a strong position but the Merrion bowling attack persevered and held YMCA to 214/9 in the 50 overs. Garin Howell led from the front with 10 overs 3/38.

At the halfway stage Merrion should have been quietly confident of reaching the target on what was an excellent track. But a spate of early wickets did not help and at 51 for 4 the position was not looking good. A 139 run partnership between Niranjan Shankar [90] at better than a run and ball and Daniel Forkin [39] put Merrion firmly on top. Then, as has happened often in the past, the need to keep the spectators interested prompted a late order collapse and it was left to skipper Chirag Poddar to bring the game home in the 48th over.

The final game saw the 5th XI travel to Balbriggan where they were well beaten by seven wickets. Robert Stanton continued his fine run of form with 33 and got some support from Himanshu Sharma [21] and Killian O’Flynn [20] but the final total of 127 all out was never going to be enough. And so it proved. 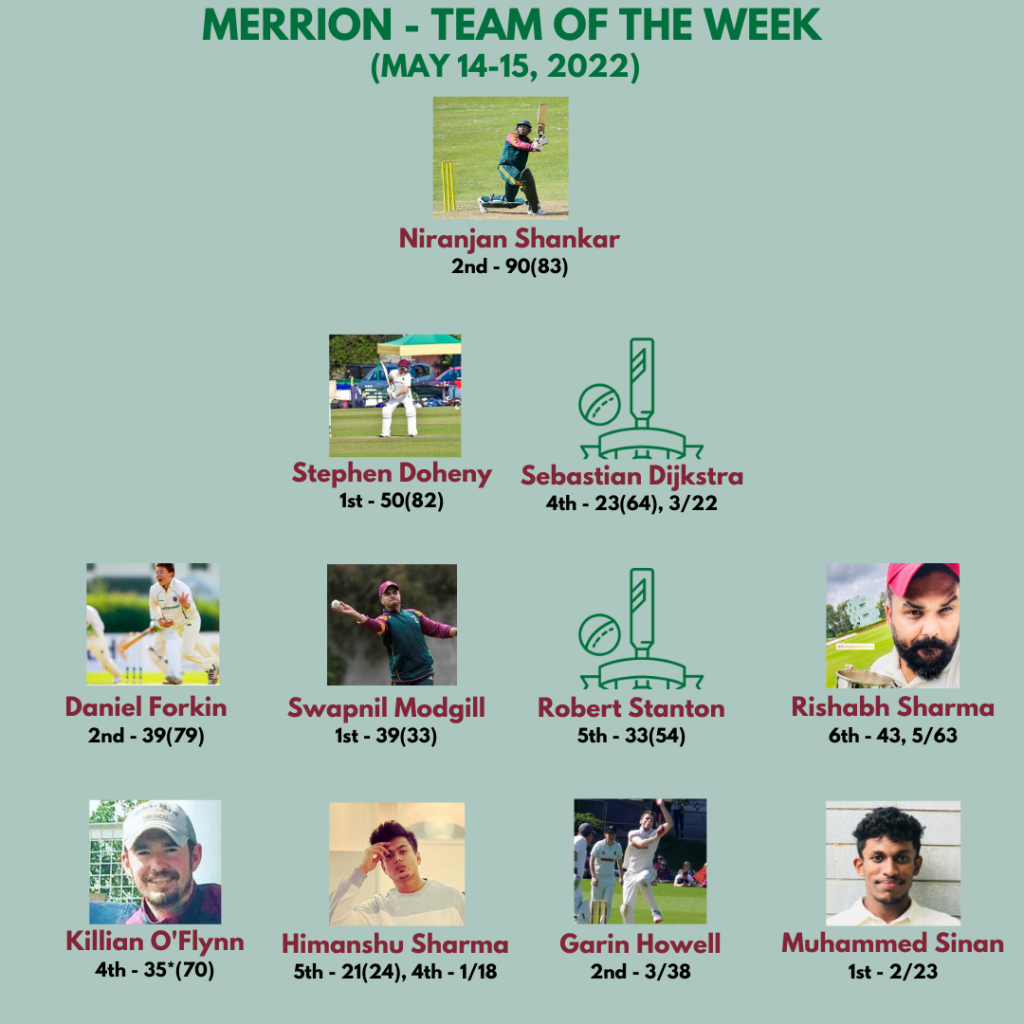 One final note on a weekend of mixed fortunes. Two matches were played on one of the new hybrid pitches [the Women had first use on the previous Thursday] and certainly, from the boundary, the wicket looked to play very well with good pace and carry.