Congratulations to Daniel Forkin on being selected for Ireland’s U19s who are due to take part in the U19 World Cup in the West Indies, starting in January 2022.

It has been a memorable year for Daniel. The start of the 2021 season saw him take up a Cricket Leinster scholarship at Queens College, Taunton. While he was there he was part of the Somerset Pathway squad and played for the Somerset U18 against Hampshire and Cornwall.

Returning to Ireland mid-season he played with success on the 2nd Xi before getting his senior debut for the club. In all he played five Premier games and took eight wickets for 135 with a best of 4/21.

Daniel is part of a strong 10 player Leinster representation on the World Cup squad. Apart from warm up games in the competition proper they have to contend with India, South Africa and Uganda.

For more information see the announcement of the squad and details of the tournament on https://www.cricketireland.ie/news/article/interview-with-pete-johnston-as-ireland-under-19s-world-cup-squad-named 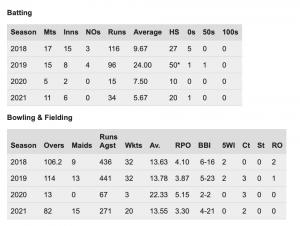