Youth cricket started back in May and matches on 8th June. Since then 12 Merrion teams have been in action. The start of the season was much disrupted as the nets project limited the available time for practice. This is now thankfully behind us and our young players can start to get some real time in the nets.

Not a great week for results with a lot of players away on holidays. But the Colts [Boys and Girls] are still in the cup. The Boys had an excellent win during the week in the Colts Cup over YMCA [another 50 for Oisin Bhoja]. The Girls also had a victory over YMCA in the Colts Cup, with Sophie Stewart taking the honours with 4/9.

Finally, we get to use the nets. It is like the start of the year over again for the Youth Academy. And it comes just in time for our Cricket Camp [Minors].  Already it is good to see kids down over the weekend to get some extra time in the nets.

The week started off well with two wins for our Boys on Monday. The Colts A had a comfortable win over Adamstown [Win by nine wickets] with Oisin Bhoja getting his third half century of the season to go with his century. Unfortunately they came a cropper the next day when they lost a close game with YMCA by 10 runs.

At the same time the Junior Boys won their cup match [QF] against YMCA. It was a good all round performance in the batting with Seb Dijkstra [35], Alex Casey [36] and Simon Kelly [40] all retiring.  There was also good support from Gavin Pantony [16*]. The total of 179/2 was the highest by any youth team of the season so far. Seb [3/14] and Cormac Hayden [3/8] then wrapped things up quickly with three wickets each as YMCA were bundled out for 62.

The Girls Colts continued on their winning ways with a very tight four run win over Leinster on Tuesday. Merrion made 90, thanks in the main to Sophie Stewart who made 30. But the bowlers, led by Niamh McNulty with two wickets, came up trumps and bowled Leinster out for 86.

The week ended badly with losses for the Boys U19 and the Boys Junior B and Girls Junior Teams.

Merrion girls finished off the week well with three victories – at Minor, Colts and u17 levels.

The highlight of the week a convincing six wicket victory for the Girls U17s against Pembroke. Runs from Sophie Stewart [31], Isabel Light [23] and three boundaries from Maria Kay to finish it off. 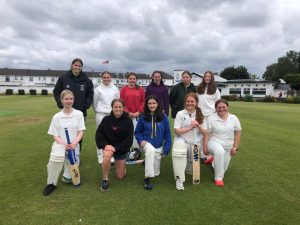 The Minor Girls had an excellent win over Leinster [no details] and this was followed up with a victory for the Colts against Rush in the cup. At one stage this looked an unlikely win with over half of the Merrion team out with few runs on the scoreboard. A great stand between Lizzie O’Reilly-Hyland [14] and Millie Jerman [15] rescued the innings. It was then down to the bowlers and they did not disappoint. Naimh McNulty led the way taking three wickets, well supported by Lucy Kay and Sophie Stewart with two each. Best of all there was a much improved all round fielding performance. 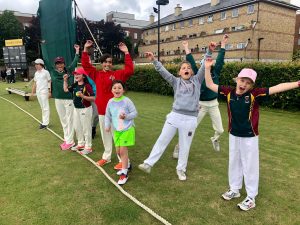 On the boys from the Colts made a big score 205/5 against YMCA [Oisin Bhoja and Harry Sandys half-centuries before retiring]. YMCA were 50/1 after seven overs before the game was stopped due to the weather.

So far this year the outstanding individual performance with the bat has come from Oisin Bhoja who not only made his first maiden century against Adamstown in an U17 game on 16th June but has two other half centuries to his credit. Isaac Dijestra and Harry Sandys also made half centuries. Both I think their first for Merrion. On the bowling front Seb Dijestra has been among the wickets. 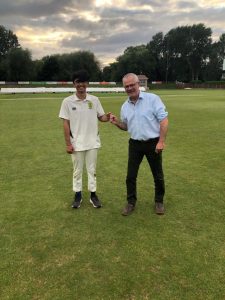 For the girls Ally Boucher and Isabel Light have both been in the runs.

There may have been some other noteworthy performances but details are not always recorded. Hopefully we will be able to fill in some more of these in the coming weeks.

Finally, we should record the excellent numbers of Cubs and U9s who have been coming down on Friday evenings for practice. The availability of food [and other refreshments for the parents] has been an added attraction.

From now on we hope to update youth results weekly.